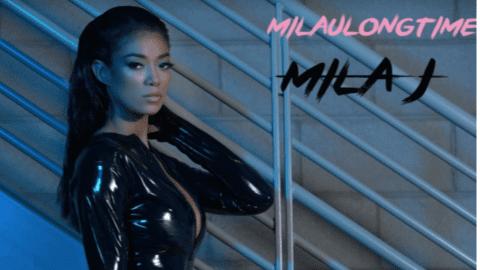 During Grammy week rolling out ran into Mila J at one of the pre-Grammy parties, which is where we got word she would be dropping her mixtape to a select media bunch for a pre-Valentine’s Day release. It’s titled Milaulongtime, which is also her Twitter and social media handle. When you have been in the […] What’s even sweeter than mixing up a few cocktails of your own? Trying cocktails created or inspired by your favorite celebs. R&B artist and actress Mila J recently mixed up a few signature cocktails as part of her collaboration with Jack Honey. Whether the occasion is a holiday, celebration, or just because it’s Friday, these […] There’s an actor-turned-photographer in Hollywood who has a sharp eye. The actor has been delving into photography for quite some time and celebs are lining up to be photographed by him. In celebration of the upcoming release of Fifty Shades of Grey, he captured amazing images of the new establishment of stars in Hollywood and beyond, including […]

Up-and-coming artist Mila J made an appearance this past weekend at the UIC Pavilion, as she performed her smash hit, “Smoke, Drink and Break Up” followed by her latest hit “My Main.” Mila J recently dropped a video for “My Main” that features Ty Dolla Sign. The song is quite catchy and has a very […]

T.I. rocks the house at UIC Pavilion in Chicago

The King of the South, T.I. brought his swag to Chicago. He made sure everyone at the UIC Pavilion felt his presence as he blazed the stage this past weekend. The Southern rapper performed everyone’s favorite hits like: “What You Know About That,” Whatever You Like,” and a few new tracks off his new album, […]

Mila J celebrates release of new EP, ‘Made in L.A.’

Mila J talks about ‘Made In L.A.’ and her sister, Jhené Aiko

Singer Mila J has released her new EP, “MILA: Made In L.A.,” and she’s understandably ecstatic. Big sister to pop star Jhene Aiko, Mila’s EP comes after over a decade of hard work and perseverance

Mila J.’s insight on females dating in the industry

Mila J has been on the scene for quite some time, but it would take a photo with her and Trey Songz to get people really talking! This past week, the attractive R&B artists posed for a photo that ended up on Trey’s Instagram and the streets started buzzing about their relationship. While there is no […]

Last night B.O.B took over the Plaza theater in Atlanta to debut the “No Genre 2” video. Joining B.O.B was Sevyn Streeter, Mila J, and Ty Dolla $ign, who along with T.I, Kevin Gates and Victoria Monet also appear on the mixtape. B.O.B got onstage to not only introduce the video, but to share a little more […]