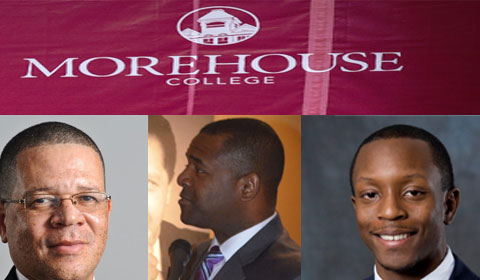 The city of Atlanta has enjoyed decades of Black mayoral leadership since the election of the city’s first Black mayor, the late Maynard Jackson. This year, Atlanta will elect a new mayor and two graduates of Morehouse College will find themselves in competition for the top post and another for a powerful city council seat. All three men are considered among the brightest minds in the city and have expectations of bringing much-needed change for Atlanta.

English is a native of Atlanta and a graduate of Morehouse College, where he received his B.A. in political science. English earned his M.A. in organizational psychology from Columbia University’s Teachers College. English serves on the board of various nonprofit organizations, including the National Center for Global Engagement, Child First USA, and the Morehouse College Center for Teacher Preparation Advisory Board. In 2014, English was unanimously elected chairman of the Atlanta Public Schools (APS) Board of Education. He was elected to his first term on the board in 2009 at only 24 years old. English has declared his candidacy for Atlanta City Council post 1 at-large, a seat currently held by longtime councilman Michael Julian Bond, son of civil rights icon Julian Bond.