On Easter, Natalie Nunn Payne received the best gift ever. It was the first time she’d whisper “happy birthday” to her newborn daughter Journey Ruth Payne, who made her debut on Sunday, April 16, 2017.

Natalie is euphoric about marriage and motherhood. The “Bad Girls Club” alum turned TV personality has every right to be. It was her second pregnancy; the couple suffered a miscarriage a year prior to the announcement of Journey’s pending arrival.

“The first loss I didn’t understand. But God told me he had a plan. Jacob held me and told me we would get through it,” she wrote on social media just before Thanksgiving.

Natalie is a social butterfly who seriously indulges in social media. Jacob, who is a former NFL player, is reserved and focused. He is the yin to her yang. It’s why Natalie, who met Jacob during an appearance in his Michigan hometown, sought him.

When we arrived at the Paynes’ residence just outside Sacramento, California, Jacob greeted us at the front door. He showed this writer and cameraman Michael Melendy to the all-white everything sitting room and disappeared. We slipped off our shoes while standing in the foyer before staging the photo shoot for this Mother’s Day issue. The sunlight pouring through the double-windowed wall proved to be one of our biggest assets.

We could hear laughter coming from the second story. Natalie was getting her makeup done by artist Vadia Rhodes and having her 17 inches of tribal braids adorned with gold jewels and braided rope courtesy of Maria Hernandez of @cali_braids. It’s a name Natalie is hesitant to reveal because she knows once the word gets out, Hernandez’s business will boom and she’ll get too busy for Natalie.

Why are we here?

Natalie-mania started during season four of Oxygen’s “Bad Girls Club.” While she didn’t last the entire season due to a fight with fellow cast mates, producers realized they had not just a star, but a supernova, on their hands. She was welcomed back for appearances during seasons five and six and the spinoffs, “Love Games: Bad Girls Need Love Too” and “Tanisha Gets Married.”

Natalie and her mom Karen Nunn made an appearance on Lifetime’s “The Mother/Daughter Experiment.” Karen, a single mom, birthed Natalie when she was 21, and Natalie’s older brother Ronald, when she was 18. The two of them grew up too nontraditional to outsiders. It was something Natalie didn’t become aware of until she was a student at the University of Southern California where she played on the soccer team. It’s when she realized being an open book with her mother was a bit too radical. But who’s tallying? There is nothing too extreme for this once raucous L.A. socialite.

Referring to her life before “Bad Girls Club,” she says, “I was a track and soccer star who graduated with a degree in communications from USC. I always pushed the limit. If I knew I could get away with it, then I would do it.”

Living in this Sacramento metro area community, which is in close proximity to San Francisco and Lake Tahoe, complements the mature Natalie who recently celebrated her first marriage milestone.

“Every year we been together you would surprise me with some amazing gift! And I’d love it and be so thankful for anything you have ever bought me! But this year this gift no money could buy! Nothing in this world could bring me such joy, tears of happiness and feel so complete! This gift has by far been my biggest blessing in life! God has blessed us with our rainbow baby and I’m forever thankful!” Natalie wrote to her husband Jacob on Instagram on their fifth wedding anniversary, which was Friday, May 5.

My experience with motherhood has been amazing since she’s here. Leading up to it, pregnancy was hard for me. I had morning sickness the entire time. This is the biggest blessing I could ever ask for.

What is the story behind her name?

I wanted her to have a name that started with the letter “J.” Jacob is my husband and I want our kids to have his first initial. My mom said, “This pregnancy has been a journey for you,” and I was like, “Oh my God; her name will be Journey.” [Her middle name, is “Ruth;” it’s Jacob’s grandmother’s name who passed away.]

Where did you and Jacob meet?

I met Jacob in Michigan. I had an appearance at the nightclub. He was one of the security guards working during his off-season. We didn’t exchange numbers. We didn’t even speak, really. But, I was kind of eyeing him the whole night. A couple weeks later, I called up to the club and asked, “Who was that guy working security?” I tracked him down.

How did you get Jacob to leave the Midwest and move to Northern California?

I kidnapped Jacob. He is so not Hollywood and in the limelight. He is in the background. He does a good job of being involved as he feels he wants to be. Tanisha, from “Bad Girls Club,” and I kidnapped him. He was my date to her wedding. Tanisha said, “You have to marry this guy. If I have to pull out pots and pans and beat him all the way to California, I will do it for you.” It was our first date.

She says today, “I knew he was the one for you.”

Jacob was more hands-on than I. If any guy could get pregnant, it would be Jacob. He carried Journey as much as I did the whole nine months. He didn’t miss a doctor’s appointment. He didn’t miss a class we signed up for. He’s been really amazing with her.

Interesting side conversations with Natalie about her TV persona and social media influence.

How have you grown since your debut on national TV?

I look back and sometimes I cringe. Then I remember the experience. I was in my early 20s. I am 32 now. It has been some time ago. [The] “Bad Girls” days were fun. The biggest change is being married. Jacob really calmed me down.

He really stepped up and tamed the bad girl; I didn’t think it could be done.

Ever since I have been married to Jacob, [I realized] the things that really sell are Jacob and Natalie, and now the baby. I get more likes, engagements and comments. If I share a photo of Jacob and I, the likes are through the roof. I don’t think people are steering away from the train wreck. All of the nonsense that once sold on the shows, people don’t want to see that anymore. They want to see the happy home, the husband and wife, the dad being a dad.

What is your ethnic background and how has it shaped you?

My mom’s family is of both Brazilian and Puerto Rican descent. I have always loved the Hispanic culture. It’s what prompted me to minor in Spanish. I took a lot of African American studies classes and culture. Journey will be very well rounded. She will learn Spanish and Portuguese, languages her mom knows.

Jacob and I lived in Brazil for a year; he actually had to learn Portuguese. He played international football.

Here’s a snippet of our interview with Karen Nunn.

I couldn’t have asked for a better son-in-law and a great father. He has been with Natalie every step of the way.

What motherly advice have you given to Natalie about motherhood?

I told her it would be a life-changing experience. I think she finally realizes it’s about Journey first. 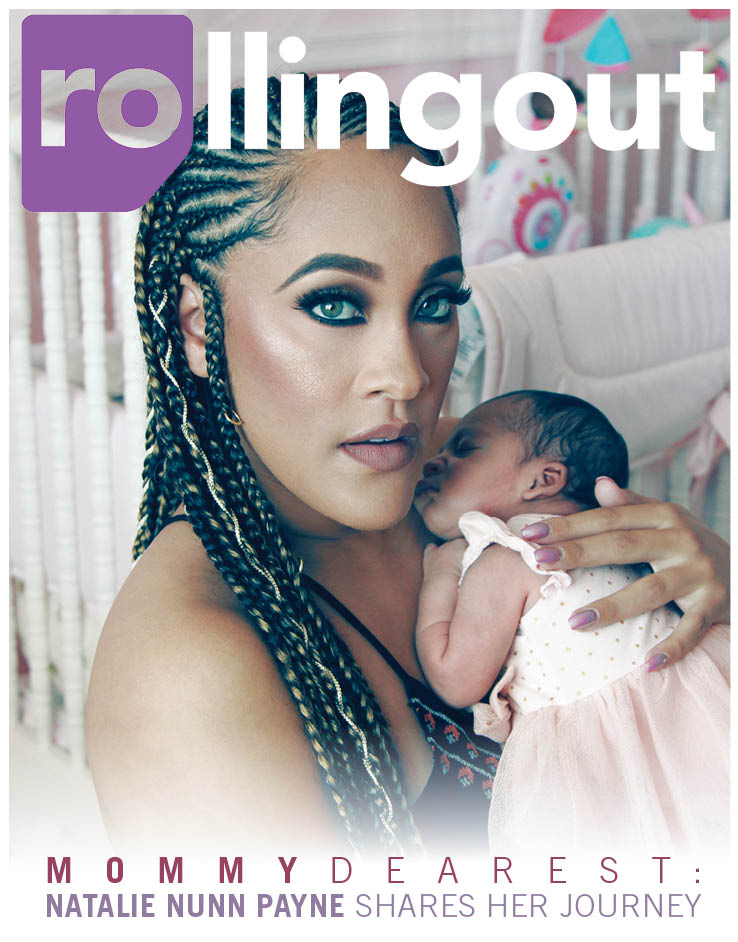