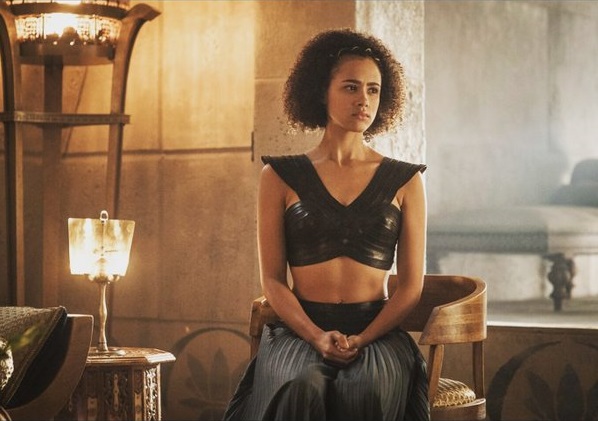 “Game of Thrones” star Nathalie Emmanuel opened up recently about how she hid her natural hair as a child.

Each Sunday, Emmanuel, best known for her role of Missandei on “Game of Thrones,” captivates viewers both with her natural beauty (that hair) and acting prowess. So, it’s surprising to learn that as a child, the British-born actress was prohibited from rocking her natural curls.

“Wearing my natural hair wasn’t really allowed when I was in primary school,” she told Byrdie of her strands, adding that she was told her hair was unsafe. “So my hair was always slicked down or put in braids, sort of hidden away.”

However, today is a different story. “I think my hair is the first thing people recognize me for,” she said, adding, “and I’m happy about that because I think we’ve all gotten so used to women straightening and changing their natural hair.”

For the 28-year-old, it’s more than just a hairstyle. In fact, she says she receives countless messages from mothers asking her to convince their daughters to embrace their natural hair. Which is why today she embraces her look both on and off the screen and understands the urge to press her strands.

“I think a lot of women with textured hair go through that same journey, where they want to chemically straighten their hair,” said Emmanuel. “And that’s fine if that’s what makes you happy, but I think many feel trapped by it.”

In addition to being one of a select few Black women to wear their natural hair on the small screen, Emmanuel is also one of a handful of Black stars to earn a role on “GOT.” An issue actor John Boyega took up with the show.

“There are no Black people on ‘Game of Thrones.’ You don’t see one Black person in Lord of the Rings,” he recently told GQ. “I ain’t paying money to always see one type of person on-screen. Because you see different people from different backgrounds, different cultures, every day. Even if you’re a racist, you have to live with that. We can ruffle up some feathers.”