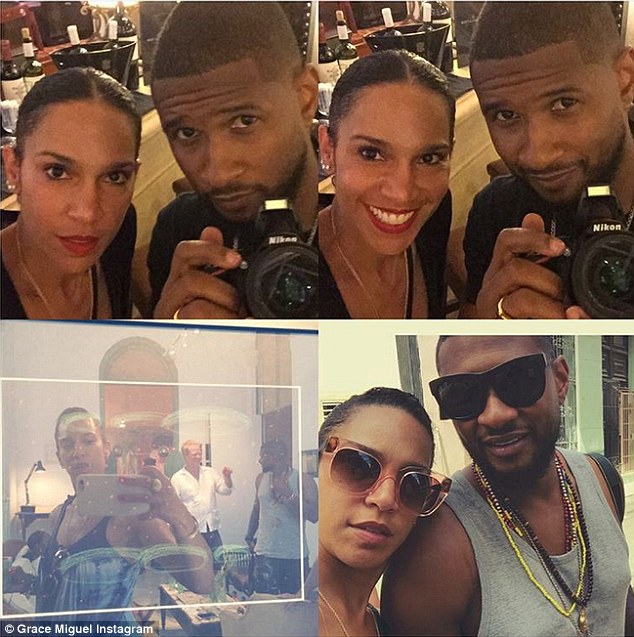 Millions of Usher fans are wondering, amid the nasty herpes rumors and lawsuits, what the multiplatinum superstar’s wife, Grace Miguel, is feeling and doing about the whole matter.

Turns out that Usher and Grace are good. Despite the $20M lawsuit against him for allegedly giving a woman herpes, TMZ reports that everything is copasetic in the Raymond household.

In fact, sources close to the couple allege that Grace isn’t concerned at all about the allegation Usher slept with a woman, who sued as Jane Doe, at least twice this year.

We’re told Grace, who’s been married to the “Confessions” star for two years, isn’t giving the lawsuit any weight.

Our sources say the woman suing has a history with Usher. She was a close friend of his first wife, Tameka Harris, and attended their 2007 wedding.

Usher believes she has something against him, and has for a long time. That’s why Grace is paying her no mind.

As rolling out reported earlier, the woman wants $20M from Usher for allegedly giving her herpes.

It remains to be seen if this will eventually be the image destroying catastrophe that it was with former in-demand comedian Jim Carrey (Dumb & Dumber) or even ex-NFL superstar Michael Vick. Usher and Vick’s tales played out quite similarly. One of the women who allegedly had relations with Vick wrote a tell-all about the terrifying experience, with the excerpt being a cautionary tale about practicing safe sex.

According to mademnoire.com, this is what Vick’s side piece, who went by the pen name Bella Enscritor, wrote in 2014:

“Another news headline came up a little further into my relationship with Vick. The headlines had to do with Vick having been accused of somehow giving a girl he slept with in the past, herpes. When I first saw the herpes news story, I was immediately scared for myself. Although I had practiced safe sex with Vick, I was still concerned that I could have accidentally made some kind of skin-to-skin contact. I didn’t play when it came to my health. I was regular with my checkups and STD/AIDS test even when I was not having sex with anyone. People would often call me a hypochondriac about my health, but I always thought it was better to be safe than sorry.

The news headlines were accusing Vick of using an alias by the name of [R.] Mexico, and going to a local clinic, and disguising himself to find out if he contracted herpes. The woman in question claimed to have been careless enough to allow Vick to have unprotected sex with her. She later said she found out the hard way after having symptoms and going to seek medical care that she allegedly had contracted herpes from Vick.

I rushed to my doctor to have lab work performed and eagerly awaited the rapid results of my blood work and cultures. Although the initial physical exam revealed nothing, I was still nervous as hell about what bad news may come. That night I went to see Vick, and unlike any time before where I would just wait for him to tell me what he wanted me to know, I asked him for myself right then and there. When I asked him, Vick told me that he did know the girl in question. He went on to say that they did have sex more than once but that he practiced safe sex each time. After saying that, he finally answered my question with a simple, ‘no, I don’t have it.’”

Based on what Enscritor wrote, do you believe her? Or was this another case of a superstar shakedown?