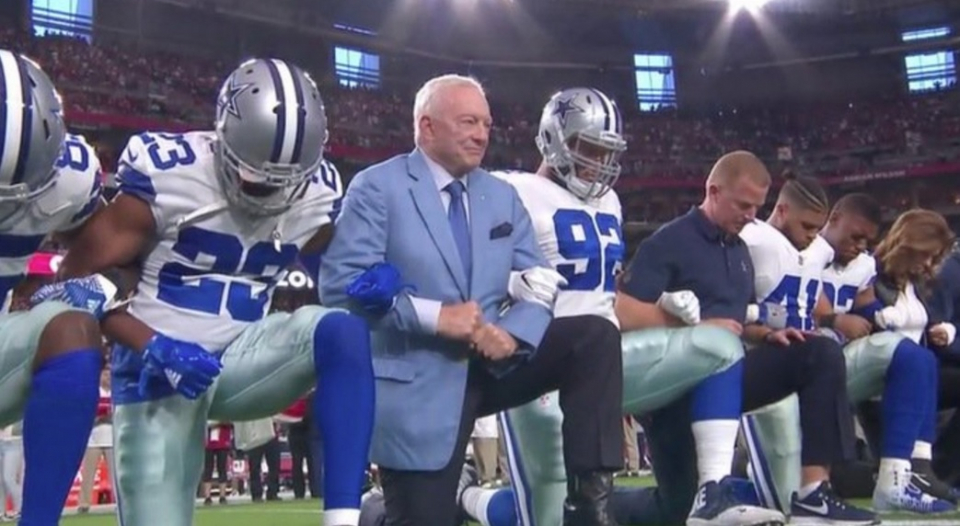 (Photo via Twitter – @DallasCowboys) The Dallas Cowboys and team owner Jerry Jones lock arms and kneel before the national anthem on Sept. 25.

It appears  that some people can’t make up their minds.

Dallas Cowboys owner Jerry Jones told reporters after Sunday’s game against the Green Bay Packers that all of his players need to stand for the playing of the national anthem before games.

Vice President Mike Pence attended the Indianapolis Colts vs. San Francisco 49ers game on Sunday. He tweeted that he was there to witness the honoring of the legendary franchise quarterback Peyton Manning. After Pence saw 11 San Francisco players kneeling, he announced on Twitter that he left the game early in support of President Donald Trump’s comments on the national anthem. It was later discovered that the picture Pence used to tweet that he was at the game was a couple of years old and that Pence told his driver to keep the car running in the parking lot before his associates walked into the stadium.

Two weeks ago after Trump initially made comments about the protests, Jones and the Cowboys locked arms and kneeled together as a team before the national anthem played on “Monday Night Football” against the Arizona Cardinals. After the demonstration, Jones said that Trump called him highlighting an NFL rule stating that players must stand during the anthem.

Many of the athletes who have protested have emphasized the fact that they aren’t protesting the flag, but that they’re protesting injustices and police brutality in the U.S. American police have killed 210 Black people this year, according to the Mapping Police Violence research project.