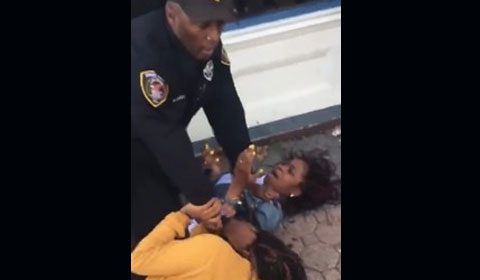 Apparently, Orange, New Jersey police officer Hanifah Davis is a real tough cop. So tough that he thinks it’s okay to rough up two high school girls getting a slice of pizza during lunch.

Nyasia and Kyasia Sorrells are students at Orange High School in Orange, New Jersey, a suburb of Newark. Davis was caught on tape snatching the girls by the hair and slamming them against the wall and ground. At one point, a school administrator attempted to stop Davis from beating the girls. Davis responded by violently pushing the man against a wall and trying to get him in a headlock. A large crowd of students gathered and were vocal and upset.

In reaction to Davis’ actions that day, students at Orange High School walked out of class. Holding up signs that read “We Want Justice,” students marched to the local police station in protest. On Oct. 12, 2017, the following joint statement was issued by Mayor Duane Warren and the city’s police chief: “In light of the altercation involving the Orange Police Department and some students, Officer Hanifah Davis has been relieved of duty pending the outcome of an investigation initiated by the Orange Police Department.  The Essex County Prosecutor’s Office has been notified of the incident, and the Orange Police will cooperate fully with the ECPO in the investigation. The investigators are reviewing all video footage available from nearby surveillance cameras, to gather as much information as possible since. Contrary to rumors on social media, an Orange Board of Education staff member was not arrested; he was issued a ticket and the issuance of that ticket is part of the investigation.

This matter is being taken seriously by the Orange Police Department and the Warren Administration. All the facts will be shared with the public as soon as they are available. Meanwhile, the OPD and Mayor Dwayne D. Warren ask that citizens withhold judgment and act responsibly until all the facts are known, at which time the Administration will take all appropriate action.”

The video of the brutal assault can be seen below: