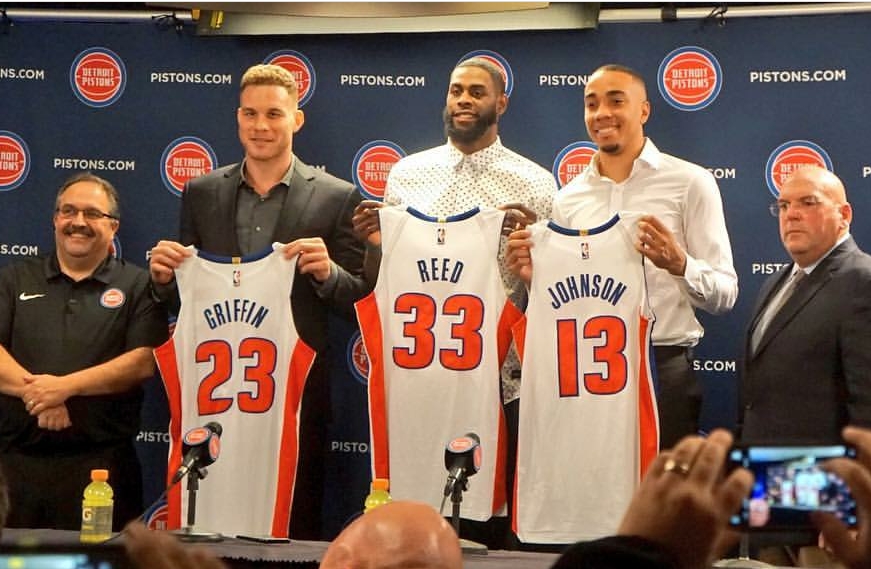 It’s official — Blake Griffin has been traded to the Detroit Pistons and the reactions are, in a word, mixed. The news seemingly came out of left field and why the Clippers would trade away the franchise player they recently dubbed “Clipper for life” is baffling. So who really stands to benefit from a trade that involves two future draft picks and an estimated $171M price tag?

While the Los Angeles Clippers clear up considerable salary cap space and score a pair of draft picks to help rebuild their roster in the near future, the absence of Griffin hammers a final nail in the coffin of any playoff hopes this season. In return, the Pistons gain an arguably all-star caliber yet injury-prone megastar to offset Pistons power forward Andre Drummond. Perhaps the Pistons are banking on the explosive scoring ability Griffin has come to be known for or maybe it’s because the name Blake Griffin will fill up seats in an arena that has remained largely empty. At any rate, the addition of 3-pointers to Griffin’s scoring arsenal will at the very least add depth to the Pistons offense. Should Griffin remain healthy and Drummond improve his consistency, this could turn into a dynamic duo in the long run. Where the former Clippers star lacks in defense, Drummond more than picks up the slack.

Pistons owner, Tom Gores considers the Kia spokesperson a key long-term asset that can give the Pistons what they so desperately need — a scoring option they can build an empire with. He believes every team needs a player like Griffin. Griffin, on the other hand, is just glad to be here. Griffin along with teammates Brice Johnson and Willie Reed traded in their Clippers jerseys on Wednesday and couldn’t be more excited about laying a new foundation in the Motor City.

“I want to play for an organization that wants me to play there,” Griffin said when asked about being blindsided by his trade to the Pistons. “This is where I want to be, and this is the place that wants me.”

ESPN NBA analyst, Chauncey “Big Shot” Billups shared his optimism over Blake Griffin’s arrival. Billups is happy for the Pistons and feels Griffin is great for the franchise as a whole.

“As a guy that’s played with Blake, Blake has never been an issue. Blake comes and he works his behind off.” the retired Pistons star told ESPN.”[He’s] been unfortunate to have some injuries [but] when he’s out there, he balls. He’s an all-star caliber player and he’s exciting to watch so it’s a little surprising to me.”

Ex-Bulls star, Scottie Pippen, however, believes that Griffin’s “value is dropping and dropping fast.” During an appearance on ESPN’s “The Jump,” the six-time NBA champion expressed the same surprise that Griffin himself voiced after learning about the trade via Twitter.

“I was pretty shocked, I felt like Blake was the guy they [the Clippers] were going to ride out and beat the storm. I think all this season he’s been plagued with a lot of injuries. He’s not an all-star player anymore,” Pippen said. “… The fact that the Clippers are a ninth seed team right now you see they aren’t going anywhere. Blake is making a lot of money. You look at those options and you realize why the Clippers decided to move him. He’s suffered a lot of injuries so you gotta think going forward that things are not going to be looking as good for him as it has been in the past.”

Die-hard Pistons fans also question the move given Griffin’s history of injuries and the Pistons’ track record of passing on potentially valuable players in key positions during free agency. At 28, Griffin has undergone six surgeries and certainly isn’t jumping over any cars yet should he stay healthy, his potential to set the Pistons on the path to playoff contention remains bright.