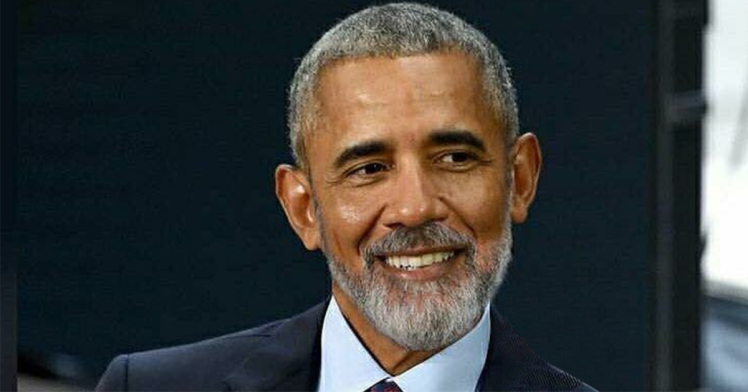 Barack Obama not only commanded over the country for eight years; he also stole the hearts of many women worldwide during that time period. Well, the 44th president of the United States had the ladies in a tizzy over his photo-shopped beard that weakened the knees of females and shattered the internet. The Shade Room captured a photo of the former president, 56, who wowed the internet most of all with his photoshopped salt and pepper hair growth.

Twitter has already voted and decided that Obama needs to grow a beard:

“Hel-lo, Mr President!” one user wrote. “#ObamaBeard is my favorite #fakenews ever.” With another one adding, “Wow… Looking good, Mr President.”

No classy way to inform you how much pleasure this picture will give me @BarackObama 😍 #ThanksObama pic.twitter.com/TrCl7YQlHj

Gurl, yes! This beard is my favorite song! pic.twitter.com/XogVM1tH3Q

Another Twitter user was ready to start a petition, with one adding, “Nothing sexier than a man with a beard.” A few people even believed that the photo was real, claiming Obama was “showing off” for his wife Michelle. But not everyone agreed on Obama’s potential new look.

User Jeri Yuttayong likened it to the time Obama wore a beige-colored suit to a press conference in 2014, with the people of Twitter calling it “un-presidential” and the “ugliest suit in American history.”

Unfortunately for Obama, and fortunately for Michelle Obama, the former president told The Hill in a 2006 interview, “I can’t grow facial hair … I get whiskers.”

Hey, a woman can dream, can’t she?

Michelle, your husband is out here showing off!!! #ObamaBeard pic.twitter.com/EPpTx71LV0

Michelle, your husband is out here showing off!!! #ObamaBeard pic.twitter.com/EPpTx71LV0

When #Michelle finds out who keeps posting that Barack #Obama beard pic…https://t.co/ePjoxqePz9 pic.twitter.com/uARkrPMUBY

This isn’t a real beard on Obama. But if he did grow it out Michelle ain’t about to let him leave the crib 😂😍 https://t.co/ryz1Qp4GkR