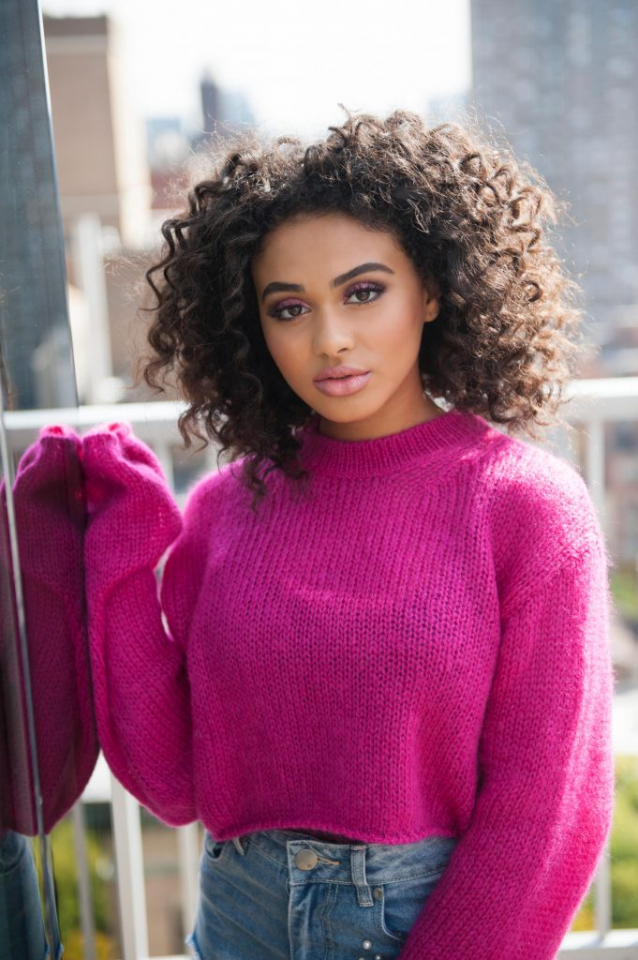 Full of charm and energy, Danielle Perkins has done what many have dreamed, and successfully moved her popularity on social media to mainstream media.

Originally known for creating viral videos on Musical.ly and Youtube, Perkins’ attitude to be unpologetically herself created a genuine connection with her fans, pushing her to the mainstream spotlight where she stands today.

Having her second chance with a show on Nickelodeon, Perkins thrives in “Knight Squad,” showing viewers, especially young girls, that you can have the elegance of a princess and still be strong and defend others.

Proud to be a part of such a diverse cast, Perkins spoke to rolling out to discuss her beginnings and the importance of her representation on a kid’s show.

You are technically the first mixed-race princess of Nickelodeon. How does that feel?
It’s just an honor to be the first mixed princess on [Nickelodeon] because when I was little, there were very few shows where someone looked like me. Especially in a strong female role. I just love that I get to be that role model for young girls, especially ones that are mixed.

You made a name for yourself on social media and now you’re moving into TV with “Knight Squad.” What’s that transition like for you?
It’s kind of weird because I started them at the same time. I was on set of another Nickelodeon show when I started Musical.ly, which is what launched that whole internet stardom. So it’s really weird that I am one of the kids that are in both of the worlds, because it’s very different being on the internet and being on TV. But I love it. I love that I get to keep up with both.

How has being active on social media played a part with you genuinely connecting with your fans?
I’ve made a very strong connection with all of my supporters. I call them angels, and I feel like I can really reach out to them. When someone becomes part of my support, it means a lot to me that they’re there for me. So I talk to them as much as I can to feel like we actually are friends in a way.

What does it mean to you to play such a strong female character in “Knight Squad”?
It means everything because I get to show girls that you can be a princess. At the same time you’re a princess, you’re also very strong and independent and you can do anything that you want and your dreams can come true. I just love the message that we send out in “Knight Squad.”

You had a blog with your sister and it later turned into a business. What is the biggest lesson you’ve learned as an entrepreneur?
That was such a while ago! I would say we were very outgoing. I wanted to stay outgoing and don’t really give up on what you want to do because that business turned into me actually starting to be more outgoing in my actual life and just being myself for other people to see. So I chose to be very outgoing and very independent at the same time. I was like 11 years old at the time so I was like putting together these videos of my sister and writing scripts for us.

Speaking of your sister, you guys look very close. What was that like growing up together?
My sister is my best friend. She’s honestly like the person that I will go to for anything. If there were to be a difference, we are three years apart. But she’s very mature for her age, too. It feels nice to have someone who is always there for you because a lot of siblings, they aren’t as close as my sister and I are, and I look at it like “Oh my God. Siblings are like that?”

You’re turning 18 soon, becoming a legal adult. What are some things you want to accomplish before you hit that milestone?
Driving. That’s like a milestone. I think I’ll still be filming “Knight Squad” by that time. Just staying busy. The milestone I would want is to stay successful in my career.

What is the significance of having such a diverse show on a kids’ channel?
Well, as a kid growing up, I didn’t really see many shows that were diverse and that’s what I really like about “Knight Squad.” It is amazingly different in so many ways and a lot of shows now too and it’s really important that kids aren’t just seeing what would be typically the American look. Everyone is very different, and a lot of TV shows are, so I just feel like that’s really important for kids to see.