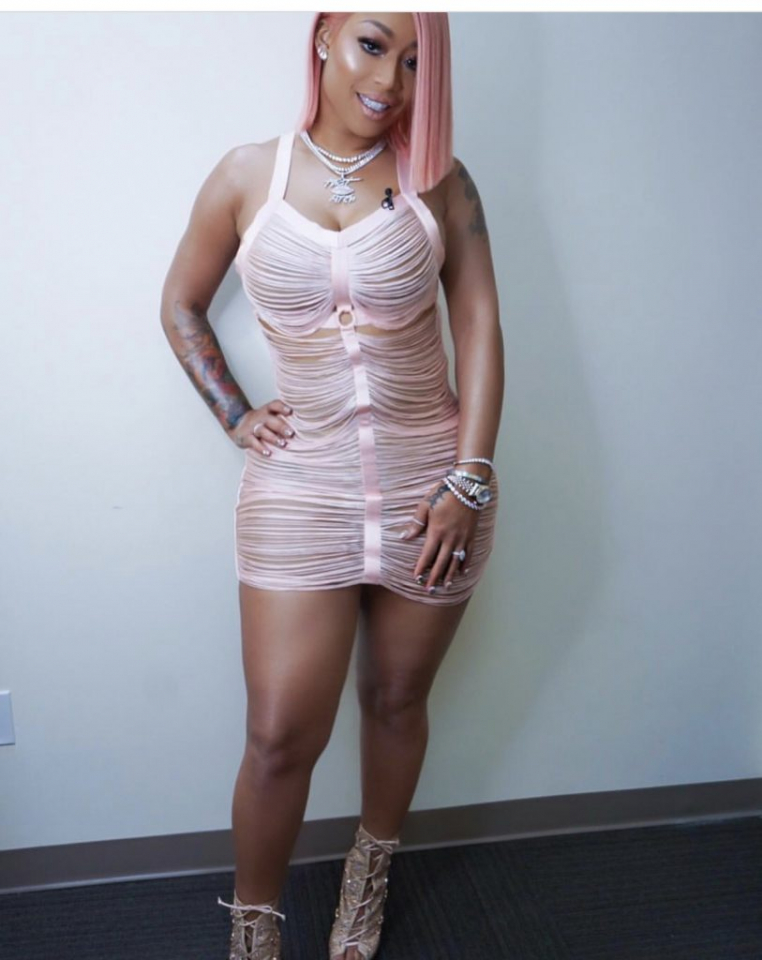 A Memphis native, the “Love & Hip Hop” audience has watched Dime go from the clapback queen to the level-headed comic relief for the rest of the cast.

Rolling out caught up with Dime to talk her new mommy life and how she managed to drop a mixtape in the middle of a life-changing transition.

How do you feel about your evolution from your beginning on “Love & Hip Hop” to now?
As we get older, we all have to evolve. If we don’t, it’s things we should change about our lifestyles. I’m very proud of the way I’ve evolved over the years. I’ve made a pretty good track in my life and I think that everyone needs to change. There’s nothing wrong with change. What’s wrong is when people stay the same. I have a lot more to do and a lot of things that I want to change going forward. As of right now, I’m pretty proud of myself.

Talk about your new found love and how that’s going for you.
Well, he isn’t new found. We’ve been going back and forth being friends for almost ten years now. It’s a thing that I was always fighting with because I felt like I was getting a little bit older and I was like, you know, I hadn’t started any kind of relationships with anybody. I wanted to have kids someday. But I prayed about it and left it up to God and he just came out the sky, out of nowhere. I was like, wow, this is somebody I already know. He knows everything about me; I know everything about him and we were in the same place in life, so it was perfect. It was like a perfect thing and I’m just so happy. He’s a good man; he’s supportive of everything that I do.

Speaking of kids, congrats! How is getting ready for your baby to arrive?
It’s stressful, honey. It’s stressful because I just want to make sure that I give my baby the life that I want to give my baby. I had a pretty good life growing up. I wasn’t poor or anything like that, but, at the same time, there are a lot of things I want to make sure I do differently with my child than what my parents did with me. I just want to provide my child with the best life possible. I’m going through my head all the time [thinking] what can I do to where my child will pick things up when they’re older. I want to make sure my child doesn’t have to do the things that I did.

What’s another aspect that you’re really looking forward to when he/she gets here?
Maybe like starting businesses, or different things that one day my child can pick up and carry on. My child won’t have to work for anybody. I had to make a lot of moves becoming an adult that I don’t want my child to have to do. So, I just want to prepare some things whether it’s businesses or different things that they can go and do, be successful with, and they can make money off of it for life. That’s what I’m trying to figure out.

Talk about your mixtape, Gangsta in a Skirt 4: KING DIME.
That’s one thing that I’ve been sitting on for a while. I have a lot of music, that’s all I do is music, and its my passion and something I’ve been doing for a long time; obviously, I’m on [mixtape] number four. I feel like I’m very underrated. It’s a tape that shows my growth as an artist, from 1 to 4. It’s a tape that shows my versatility as far as me singing, rapping and being on different sets with different guys. I make sure all of my subjects are subjects that women can feel empowered by. I made it King Dime. I didn’t want it to be Queen Dime because, before my finance came along, I was doing everything by myself. All the moves that I was making, I made them by myself.

What are you excited about for the audience to see about you in this upcoming season of “Love & Hip Hop: Atlanta”?
I’m excited for them to see my pregnancy, but I’m also excited for them to see I’m still working on my album. I finished my mixtape and shot videos while I was pregnant and people didn’t even know it. It’s just me balancing and going through things for the first time in my life in a big transition and still being a Dime Piece and getting all of my work done. I know when I have my child, I will be off for a second. So, I feel like the audience is going to be interested in seeing me still moving and making moves with a baby in my stomach.