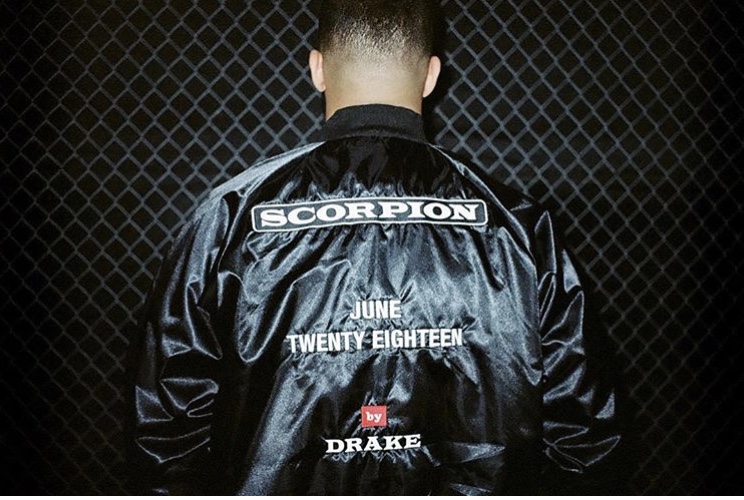 Drake is set to release his fifth studio LP, Scorpion, in June.

The “God’s Plan” rapper took to his social media accounts on Monday, April 16, to tease the artwork for his forthcoming record, which follows 2016’s Views.

Alongside a photograph of himself rocking a bomber jacket with the album title and date on it, he captioned the post on Instagram: JUNE 2018 ”

Little else is known about the record, but it comes after the 31-year-old hip-hop star, whose real name is Aubrey Drake Graham, released the single “Nice for What.”

He told his fans at his OVO Music Festival in his hometown of Toronto, Canada, that he’d started to prepare his next record.

Speaking on stage, with the backdrop of Views behind him, Drake told the crowd, “I’m going to go back to making this new album in Toronto, just for you.”

After Views, Drake released the mixtape More Life in March 2017.

The compilation of songs broke streaming records on both Apple Music and Spotify.

Within the first 24 hours of being released, the project garnered a whopping 89.9 million streams globally on Apple Music — handing him a new world record for streams in a 24-hour period.

And, on Spotify, the first full day of release for More Life saw it rake in the best first-day streams for any album on the service.

Meanwhile, Drake has smashed a UK chart record previously held by The Beatles.

With “Nice for What” at the top of the singles chart this week, it comes less than 12 months after January’s “God’s Plan” was in the same position.

This means he’s broken the record for having the shortest time between nabbing a number one single.

This has only been achieved once before by the iconic Liverpool band, who followed “Get Back” with “The Ballad of John and Yoko,” which was their last number one in the UK in 1969.

Drake is yet to give an official release date for Scorpion, but it will be released on Young Money, Cash Money/Republic.