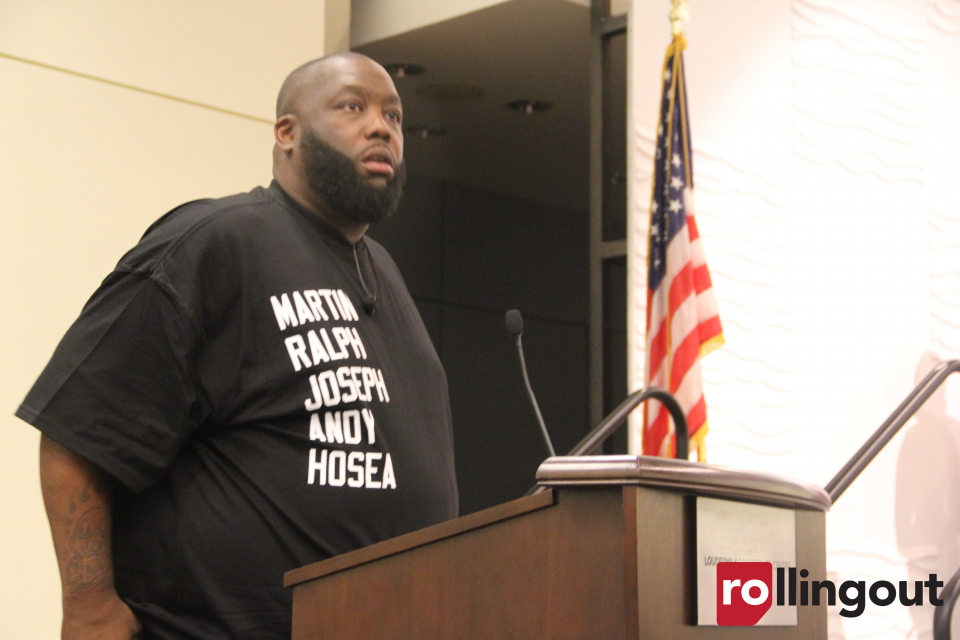 Being a young dad, how did that change your outlook on life?

Killer Mike:  I knew sh*t was real and all of the brothers in the barbershop knew. I was very blessed; I had a biological and non-biological father. My parents had me at 16 and 19 years old and my mom married my non-biological dad who has essentially been my dad my entire life as well so I was lucky I had two dads who were both young men and they were always honest with me about young fatherhood. They even warned me about it. Like every young boy, I have a high sexual desire and high fear about going into the store and buying condoms with not a lot of money to do it. I made a bad decision by getting a woman pregnant and not being prepared to be a dad. All my children, I think I had too early and I didn’t have a marriage and as an adult, you realize that’s not right to the kids or yourself, the kids or the mother. I was raised in my grandparents two parent household so I knew what a two-parent household was supposed to look like. My grandparents were all inclusive if there was an event for me, everybody had to come – didn’t matter if you were bio or non-bio, if you are my father, we expect you to be there. In my life, I was encompassed in a circle of very good men and never thought I made some of the same mistakes they made – I had the resources they didn’t. I have a very involved family. I remember Miss Ann of Miss Ann’s pet shop, I walked in with my oldest son Malik, she asked was he my son (at first she thought he was my brother); I said yeah and she said; “you’re not that much older than him, ya’ll just raising each other”.  That’s really what a young father is, you are learning the world yourself, and you’re growing and getting something’s right and pass those on and what you don’t get right you explain to your child. That’s what my dad did for me, I find myself doing to my son who is now 23 and doesn’t have a child and not married. He’s waiting until he’s a proper man who can afford and that’s based on the advice my dad gave me and his father gave him, it seems to be finally working and filtering down and creating a more positive outcome.

Why is it important for black kids to have a positive black male presence in their life?

Propaganda works against the glory of black people in this country. That’s doesn’t mean I don’t like this country or I haven’t had a good life here, but propaganda is propaganda. When watching the news, we seem to be the criminal, lets listen to conservative talk radio, we seem to be the villain by way of government, we listen to the black radio station, we seem to be the victim because the truth of it is mostly black men are working brothers who are trying to do right by their children and in turn helping some other children too, their nieces and nephews, or the little brothers they see in the community or football, basketball or baseball coach. The CDC actually statistically found that black working-class fathers spend more time with their children than any other group. That contradicts a big fallacy that’s taught that black children do not have their fathers, which that stat proved that’s not true, we are actually involved more. I think that once we start to change the narrative, the treatment of our brothers will change.

What advice do you give to young fathers trying to figure it out?

My first advice is the best advice is this, listen to young men. The three things you can do is make sure you are not poverty so you don’t have to end up making bad decisions.

1). Further your education. Learn a new skill or trade. Don’t go to college just to be going to college, get a specific degree. In the next 20 years, we are going to be building states, get your CDL, ironworkers, etc. This way you will always have a place in the marketplace.

2). Keep a job. I don’t care if it’s Wal-Mart while you are working on that trade. That keeps you from doing something stupid to get money. Even if that means you can’t go out and kick it or instead of going to the moves, stay home and watch the fire stick for 24 months. Keep a job while furthering your education.

If you do those three things I can guarantee you or some variation of, you are going to be a more successful human being.

What was your fondest memory with your father figure?

My fondest memory with my grandfather was fishing. Fish always lead to long conversations and learning stuff from him. Fishing was the place my grandfather helped me understand despite what laws tell you, God gives you the right.