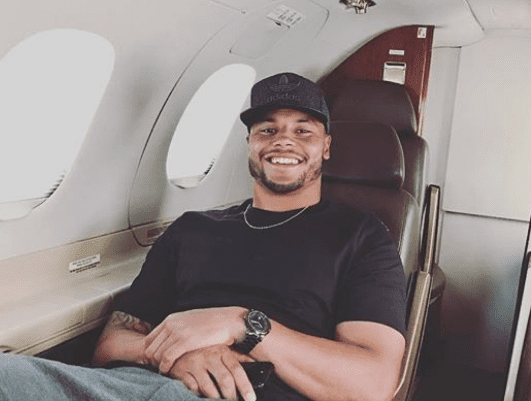 Dak Prescott of the Dallas Cowboys continues to catch flack due to his thoughts on the national anthem protests. Prescott, 25, had shared his views during a July 27 press conference after the Cowboys training camp practice in Oxnard, California.

Prescott took the side of Cowboys owner, Jerry Jones, insisting that the football field is not the place for protesting injustices in America. Jones banned all of his players from protesting before or during football games.

Prescott has caught backlash from several NFL players, entertainers and fans following his statement on the national anthem.

Rapper Game also used social media to speak out against Prescott with the Instagram caption, “COONgratulations @_4dak (Dak Prescott). Might as well throw on that MAGA hat 🤡 [@kaepernick7] #F–DonaldTrump

Some NFL fans even went so far as to call Prescott an “Uncle Tom” for his views.

There will ALWAYS be people like Dak Prescott. They were there on the plantation and they were there during the Civil Rights Movement. And yet because of the sacrifices of the people who pressed on, he can play in an integrated league. He’s not the first and he won’t be the last. https://t.co/kaIW6sU4D8

Dak Prescott should wear “Uncle Tom” on his name plate

Prescott has used his platform to get behind issues that are close to him. For instance, after losing his mother to colon cancer in 2013, he became an advocate for cancer research.

But his good deeds are being overshadowed by his stance against national anthem protests. Cowboys owner Jerry Jones is a good friend of Donald Trump’s, and the two have discussed the national anthem issue in the past. Trump has made it known that he has disdain for players who protest and has created a firestorm around the issue.

But the national anthem is drenched in racism against Blacks.  The lyrics in question occur in the third stanza of the “Star Spangled Banner.”

“And where is that band who so vauntingly swore / That the havoc of war and the battle’s confusion, / A home and a country, should leave us no more? / Their blood has washed out their foul footsteps’ pollution. / No refuge could save the hireling and slave / From the terror of flight, or the gloom of the grave: / And the star-spangled banner in triumph doth wave, / O’er the land of the free and the home of the brave.”

Prescott will likely continue to catch flack unless he walks back his statement. By standing against Colin Kaepernick and other Black players who protest, Prescott appears to be standing with Jerry Jones who could be on the wrong side of history.