In a move that has to be greatly embarrassing to the president of the United States, first lady Melania Trump breaks rank with husband Donald Trump after he insulted NBA megastar LeBron James’ intelligence. She, conversely, complimented King James on the opening of his state-of-the art school in Akron, Ohio.

And, to add insult to injury to Donald Trump, wife Melania Trump, 48, said she would like to visit Lebron’s school for troubled kids in the near future. This comes less than 24 hours after Donald Trump, 72, threw shade at LeBron and CNN’s Don Lemon as he questioned LBJ’s intelligence and called Lemon the “dumbest” man in news.

Moreover, Donald Trump thought he was shading LeBron, 33, when the president said, “I like Mike,” in a reference to his preference to Michael Jordan, the NBA legend most consider the greatest of all time. But even Michael Jordan came to LeBron’s defense, as did a gallery of athletes from multiple sports.

In a statement released by her spokeswoman and obtained by NBC News, the first lady believed the 3-time NBA champion and 4-time NBA MVP “is working to do good things on behalf of our next generation and just as she always has, the First Lady encourages everyone to have an open dialogue about issues facing children today.”

Here is the statement in full:

“It looks like LeBron James is working to do good things on behalf of our next generation and just as she always has, the First Lady encourages everyone to have an open dialogue about issues facing children today. As you know, Mrs. Trump has traveled the country and world talking to children about their well-being, healthy living, and the importance of responsible online behavior with her Be Best initiative. Her platform centers around visiting organizations, hospitals and schools, and she would be open to visiting the I Promise School in Akron.”

Jordan, arguably the most beloved athlete of all time, joins Melania Trump in the wave of support buoying LeBron.

Even Lebron’s arch-enemy, Stephen Curry of the Golden State Warriors who has beaten LeBron’s Cavs three out of the past four years, was vocal in his support for King James. 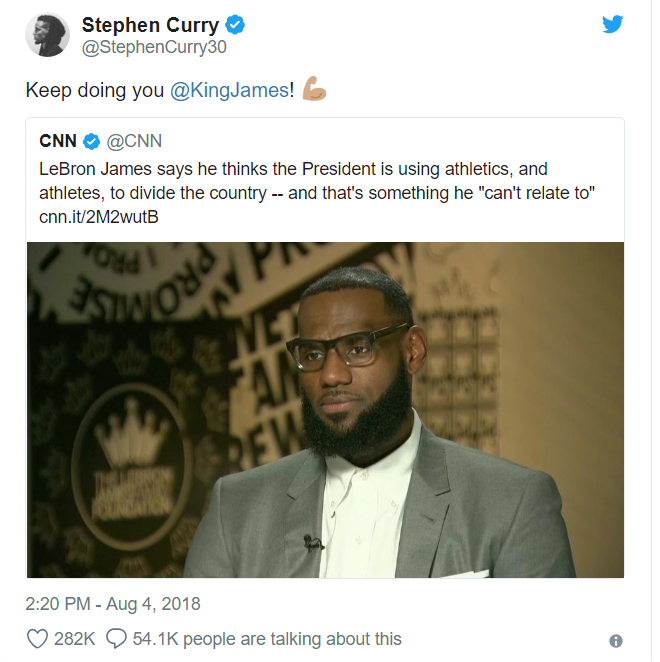 Many others from the sports world posted up strong behind James and lambasted Trump for his idiotic denunciation of arguably the nation’s most popular athlete today.

Flip the e-page to view the scorching rebukes of Trump from the NBA, the NFL and beyond: