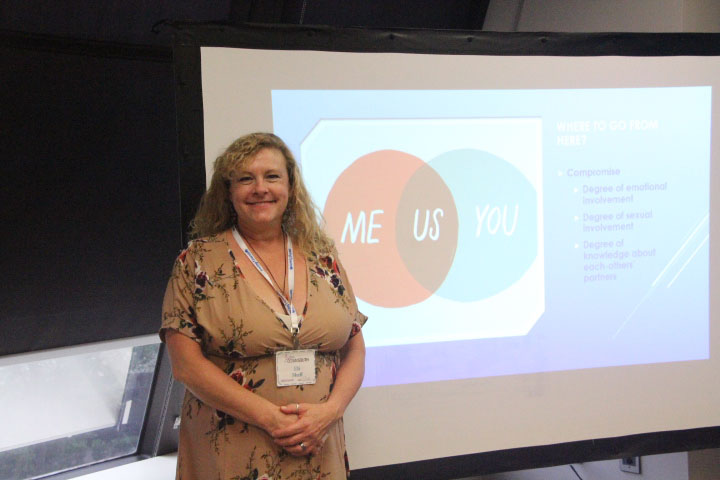 The scope of sexuality has changed dramatically in the South, as it has in many other parts of the country. As millennials reach their peak sexual performance, “vanilla” relationships and sex give way to more adventures appetites. This week, Atlanta played host to the Sex Down South Conference held at the  Hilton and it is an event not for the faint of heart.

The workshops that were offered included a variety of topics from raising children when the parents are LGBTQA to how to properly introduce bondage into the bedroom. One workshop titled Non-monogamy Mis-match: When one partner wants Consensual Non-Monogamy & Another Does Not, which was moderated by Dr. Elisabeth Sheff, introduced to the audience details regarding today’s modern relationships.

Dr. Sheff approached her subject matter from two sides, that being of a couple who have decided to add another person to their intimate relationship. First, she described polyamory, which is having an intimate sexual relationship with more than one person at a time with the full knowledge and acceptance of all partners involved. In such lifestyles, rules are set for what is allowed regarding intimacy between the partners. Dr. Sheff stated that her years of research and data collection from people who identified themselves as polyamorous is that those relationships can actually last for many years. There is a difference between a polyamorous relationship and swingers.

Those who identify as swingers generally do not create deep emotional bonds or rules. It is a sex partner for the moment. True polyamorous relationships want a stable and reliable sex partner. When it is a male and female couple looking for another female they are called Unicorn Hunters. “A unicorn is a single female between the ages of 25-35 who is willing to be submissive to a couple and follow a certain set of rules to maintain the status of their relationships,” according to Sheff. A unicorn in such a relationship is there to fulfill the desires of the couple they are involved with. This differs from what is called a Triad relationship, in which all three partners have not only a sexual relationship but a fully romantic and engaging lifestyle. All three consider themselves as a unit. Sheff explained, “These relationships last for many years and we see participants engaging in daily life that includes raising the kids, mutual life decisions.”

She went on to state, “such a lifestyle can be especially helpful if one partner dies, and the other two can grieve and function together.”

However, a 61-year-old bisexual Black woman spoke up and told her story that should serve as a caveat. She explained that for years she was involved with a couple and their kids. She acted like she was another mother and equal partner, but recently the couple decided that they wanted to introduce a younger woman into their bed. The woman stated that she no longer felt special and was devalued. “I realized that I put my heart into this relationship and I feel moved aside and now as I grow older I fear who will care for me,” she said.

Sheff explained in her talk that the main feature of such poly relationships is the handling of jealousy. When all partners are fully aware of each other’s partners there is no “cheating” unless rules are broken. Those in such relationships usually have rules about when and where they can have sex with another person. Breaking these rules can lead to the end of relationships. It is all a part of what is called “consensual non-monogamy” or CNM.