The former CEO of CBS Les Moonves harbored a longstanding grudge against superstar Janet Jackson for her infamous “wardrobe malfunction” at the 2004 Super Bowl halftime show. He was reportedly determined to “ruin her career” for what has been dubbed as “Nipplegate” when her breast was briefly exposed by singer Justin Timberlake, according media reports at the time.

Moonves, however, is the one who has been destroyed after his 24-year stronghold at the helm of CBS was snapped by the second round of sex abuse allegations against him. These accusations included forced oral sex and career retaliation against the women who were strong enough to turn him down.

As part of his departure package, Moonves and CBS are donating $20 million to organizations affiliated with the #MeToo movement.

This is far from enough punishment for a trio of comedians who have worked for or at CBS:

Judd Apatow said this on Twitter after learning of Moonves’ ouster: 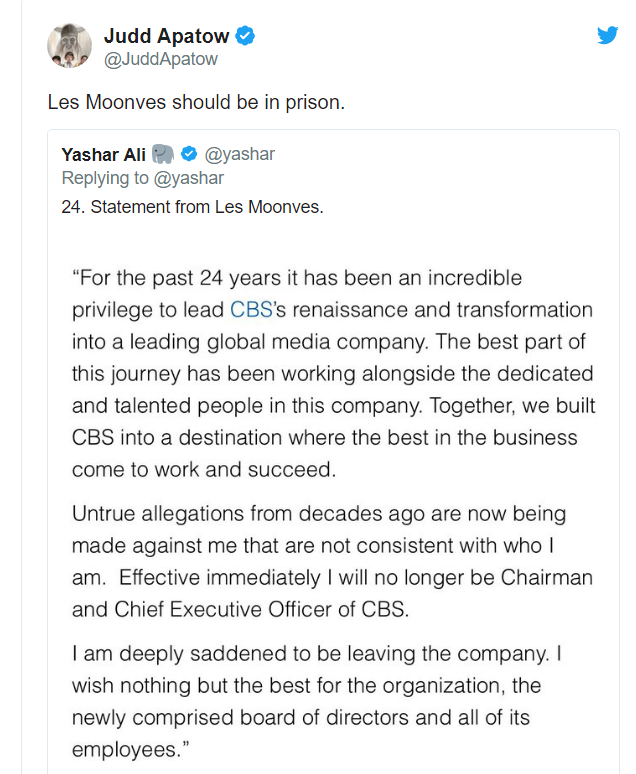 Comedienne Kathy Griffin, who has proven many times she is unafraid of public confrontations, had the harshest response for Moonves and his ex-wife Julie Chen: 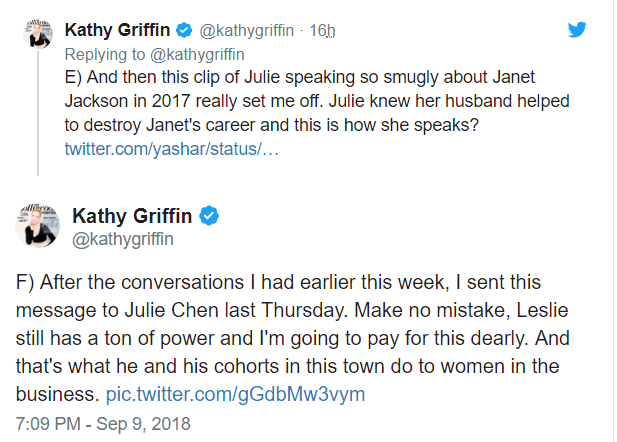 In that scorching text, Griffin said this to Chen, co-host of “The Talk”: “You know what Julie? I change my mind. F— you and your misogynistic husband. You two deserve each other. Oh, and tell him Kathy f—ing Griffin said hello. Bye b—-.”

Rachel Bloom, a co-creator and star of the sitcom “Crazy Ex-Girlfriend,” sealed the coffin on the matter with this prickly tweet:

“As an employees [sic] of CBS, I would just like to say that Les Moonves should be fired without getting a f—ing dollar. The actions described in this article are those of sexual assault and shame on anyone else in the corporation who knew about his crimes,” Bloom tweeted.

Hours later when it was reported that “CBS confirmed that Moonves is leaving with no exit compensation pending the outcome of the investigation, and that he and CBS will donate $20 million to #MeToo charities,” according to HuffPost, Bloom responded on Twitter with: “Good. CBS: in the spirit of the new year, let’s make this the beginning of a new era.”

Moonves’ vendetta against the youngest Jackson singer was confirmed by Yasher Ali, a freelance journalist and outspoken activist in the #MeToo movement, according to the HuffPost.

Moonves was said to be incensed back then that Jackson did not offer up a teary apology publicly as Timberlake did. Subsequently, the ban from performing at the Grammys the following week in February of 2004 was lifted for the former N’Sync singer, but not Jackson.

Jackson’s was unofficially blacklisted by MTV after the incident, despite her plea that “Nipplegate” was an accident, and her career never really recovered afterward.