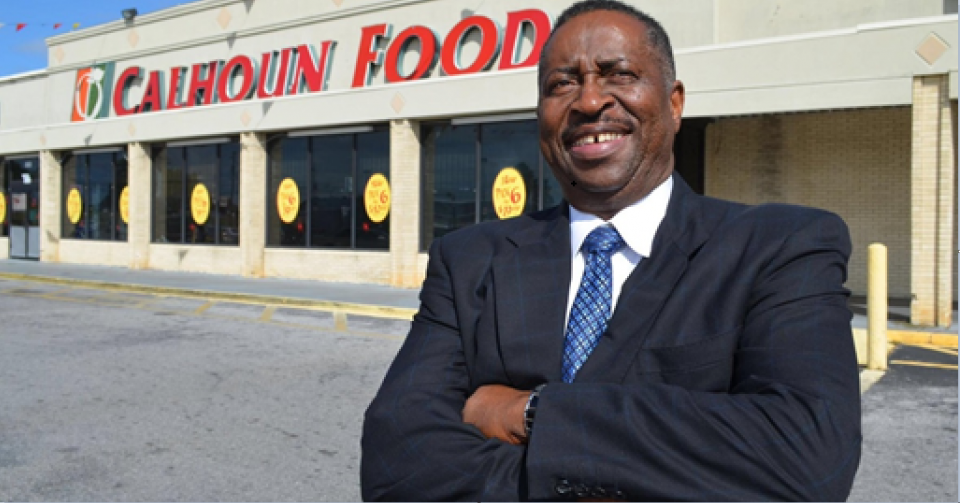 Greg Calhoun was a pioneer and a trailblazing magnate in the grocery store business. He worked his way up from being a bag boy to becoming the first African-American to own a major grocery store in the South. His empire expanded to 15 grocery stores before the last store was closed in 2015. Ironically, the very first store that Calhoun purchased just so happened to be the same grocery store he worked in as a teenager. Calhoun recently passed away at the age of 66 in Los Angeles, CA.

Calhoun was always a hard worker, and as such he purchased his first grocery store by the age of 32 after receiving a million dollar loan. He achieved much success in his life by believing in himself and demonstrating a hard work ethic. From his experiences with owning the Calhoun Foods supermarket chain, came other business ventures including a marketing company where he represented national brands such as Kraft, Frito Lay, and Coca-Cola, and partnerships with businessmen including comedian and entertainer, Steve Harvey. The duo partnered on several ventures, including Ameriitex, a manufacturer of latex gloves located in Eufaula, AL and an investment group named HarCal that launched a line of food products.

Calhoun’s death was learned through his daughter, ShaKenya Calhoun, when she shared the news via a FaceBook post stating that her father died on Thursday (October 11, 2018) at 5:55am at Cedars-Sinai Medical Center in Los Angeles.  The full FaceBook post can be found here.

Calhoun touched the lives of many people through his businesses and philanthropy. He maintained close ties with many upstanding businessmen, luminaries, politicians and other progressive people throughout the nation. The Reverend Jesse Jackson, Sr. was deeply affected by Calhoun’s death and released the following official statement regarding his longtime friend and Rainbow PUSH board member.

“Greg Calhoun, my brother beloved, was a brilliant businessman who became a proud frame of reference in the retail supermarket industry. He blazed a trail through the food deserts of Alabama with his chain of grocery stores in underserved African American communities in Montgomery, Selma and Tuskegee.

Greg founded Calhoun Enterprises in 1984 and his was one of a small handful of black-owned full-service supermarkets in the country. His partnerships with his friend, Steve Harvey, and others solidified his stature in the business community.

He stood and marched on the right side of history as a fighter for freedom and Rainbow PUSH board member. More importantly, he was a loving family man who walked on faith. I miss him so much already.”

As news of Calhoun’s death circulated, tributes started pouring in from celebrities, entertainers, business men, politicians and the like. See below for more touching tributes.

Steve Harvey, entertainer, television and radio host, producer, author and business mogul:
“It is extremely difficult to say farewell to my closest friend, business partner and golf and traveling buddy. Greg had a brilliant mind and was a successful businessman, a master negotiator, and one of the most welcoming and energetic spirits I have ever known. His smile, his laughter, and his compassion will be missed by us all. I was with him to the end. It’s good to know that right now my best friend has entered those pearly gates and is now teeing off in heaven.  Never forgotten.”

“Greg Calhoun was a pioneering black businessman who provided jobs to African Americans and others across the nation.  He is a freedom fighter, who throughout the years participated in several historic and human rights initiatives that impacted the nation and the world. His legacy is his life and it will not be forgotten.”

“Greg was a dear friend for more than 30 years. I will truly miss all our talks, our laughter and the great times we shared together.  Greg’s leadership as a businessman created thousands of jobs throughout urban America and beyond. I was honored to know him and work with him on our many fights for social justice as board members of Rainbow PUSH. This a tremendous loss to communities across America.”

“I have known Greg Calhoun, my hometown hero for countless years. His unselfish love of people, his social consciousness and business acumen are the attributes of which legends are made. Yet, in the midst of his many successes to the very end, he allowed God to order his steps. My heart aches today, but Greg’s spirit will reside in my soul forever.”

“I have known Greg for almost four decades. We shared many rounds of golf together.  We enjoyed a great business relationship and a friendship that began when I met him. I have so much respect for Greg. Even with all of his many accomplishments, he never changed.”

“My father sold Greg his first supermarket store which led to several more. Our families connected then, and we have remained friends throughout the years. Greg means so much to my family personally.  We were overjoyed to see his tremendous growth and leadership. We are so thankful for our relationship and proud of his accomplishments.”

“Greg Calhoun manifested all of the hallmark qualities that make a food retailer such a noble entrepreneur. A savvy businessman, an innovator, a community activist, a caring human, and above all, a friend. He was a tremendous contributor to FMI’s success. Our industry and indeed the world, has been lessened by his death.”