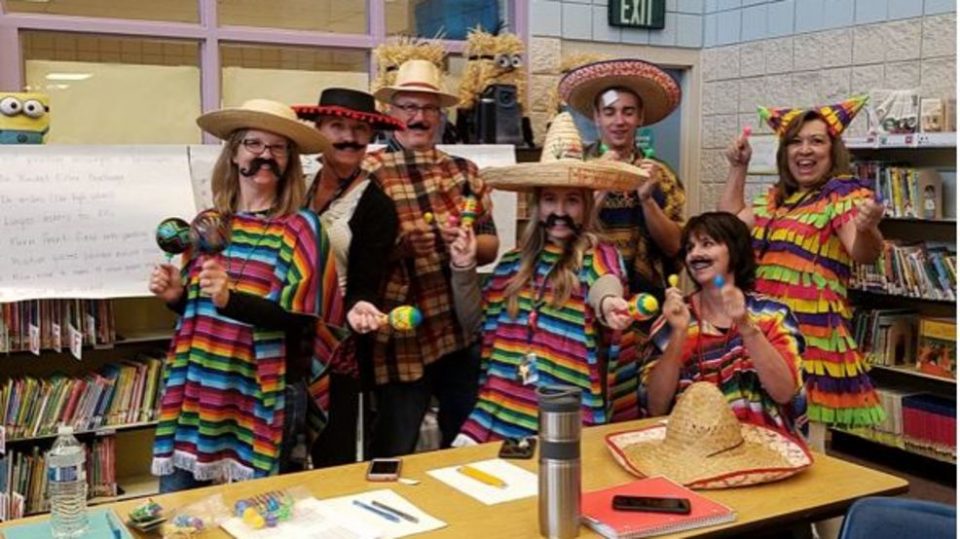 Donald Trump’s virulent and vicious demagoguery — the practice of appealing to people’s prejudices — has spawned a new wave of blatant and violent forms of racism, ethnic strife and xenophobia.

The latest exhibit of the aftermath of Trump’s malicious denigration of minorities and migrants played out in Idaho, where a group of White schoolteachers thought it was a good idea to dress up as the Mexican border wall for Halloween — and then post the photos on social media.

Employees of Middleton Heights Elementary School had the signature Trump phrase on the walls: “Make America Great Again” for Halloween. Moreover, the school staffers were apart of the elaborate costumes and were also spotted wearing stereotypical sombreros, ponchos, and fake mustaches, as reported by NBC News, the HuffPost and AJPlus:

Idaho’s Middleton school district apologized after elementary school teachers dressed as a border wall and Mexican stereotypes for Halloween. The superintendent said the costumes were "clearly insensitive and inappropriate" but denied any "malicious" intent. pic.twitter.com/DwDDRuxoqE

Imprudently, a member of this racist clan posted their hijinks on Facebook, inciting outrage nationwide. Superintendent Josh Middleton issued an apology … sort of.

Despite the fact that Middleton acknowledges the flagrant insensitivity, he stopped short of saying the teachers acted out of malicious intent.

“Last night, a parent contacted me expressing concern over staff costumes worn here on Halloween,” he said. “I’m deeply troubled by the decision by our staff members to wear those costumes that are clearly insensitive and inappropriate … We are better than this.” He continued, “We already have district administration looking into the matter first thing this morning … Do I think there was a malicious intent in these poor decisions? No, I don’t. Was there a poor judgment involved? Absolutely.”

A score of Idaho-based advocacy groups — the ACLU of Idaho, Immigrant Justice Idaho, and PODER of Idaho — stormed the superintendent’s office with a statement talking about how much harm this photo has caused.

“The intent or misjudgments of the individuals involved does not undo the trauma experienced by students, families and communities,” the letter reads. “The impact on these students does not stay only with them but has lasting effects beyond the school or classroom. We believe the school and classrooms have now become hostile environments that are not conducive to the education of the students.”

The school district has yet to identify the perpetrators, and there is no indication yet if the employees will face disciplinary action or be terminated.