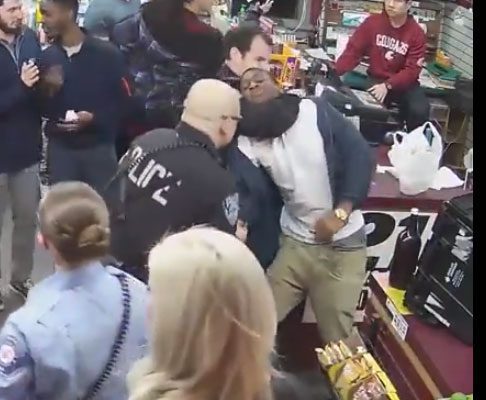 One of the realities of living as a Black man in America is that a chance police encounter can result in a beatdown from cops. This apparently happened to former Washington State University football player Treshon Broughton while attempting to make a purchase at a store in Pullman, Washington. In the video, Broughton is heard asking a cashier if he had left his card there from a previous purchase. As he is talking to a friend a police officer is near him and hears the clerk state that Broughton used a fake $20 bill.

At first, the officer asks Broughton for his ID then he decides to arrest him. Broughton seems confused and has the ID in his hand as the situation spirals out of control. The officer calls for backup and soon he finds himself struggling with cops and he is choked, punched, kneed and tasered before being placed in handcuffs. The arresting officer then tells Broughton he is under arrest for passing a fake $20 bill. But when the cop asks the clerk for the bill, he gets a shocking response, they don’t have it. Then the cop asks how did you know it was fake and a clerk states by the color.

Ultimately, Broughton was arrested not for trying to use a nonexistent fake $20 bill, but for obstruction for not submitting to a groundless arrest. The incident happened at Bob’s Corner Market on Feb. 18, 2017, but police have just released the bodycam footage this week. Broughton has filed an excessive use of force lawsuit against the Pullman Police Department and the video was released as part of the discovery process in the case.