Racially-confused activist Rachel Dolezal, who was famously exposed for being a white woman pretending to be African American, is getting ripped anew after she had the audacity to compare her new memoir to first lady Michelle Obama’s book Becoming.

Dolezal is selling her 2017 autobiography, In Full Color: Finding My Place in a Black and White World. It is the story of her notorious adult life as a Caucasian who camouflaged her appearance and hair to appear to be a Black woman. She used this trickery to rise to become chapter president of the NAACP chapter in Spokane, Washington, from 2014-15 and teach African American studies.

Dolezal shared a photo online where she took a photo of hers and Obama’s books side-by-side with the caption “two great memoirs.” Obama’s memoir, Becoming, has broken numerous sales records and became the most read American book of 2018.

Dolezal, 41, who now goes by the name of Nkechi Amare Diallo, has since deleted that IG post, but it was screen captured by the likes of freeishmedia.

One particular user had an interesting thought about Dolezal: 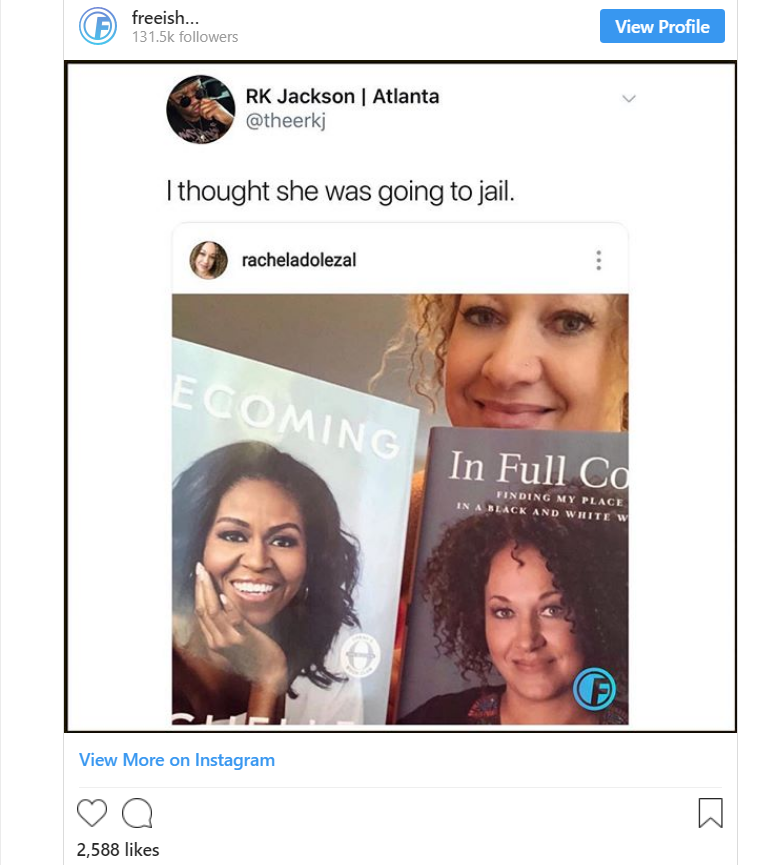 Dolezal told her 32K followers they can purchase a signed copy on her online store for “no extra charge.” She added that Obama’s book can be found “almost anywhere.”

Obama’s fans came for Dolezal in waves, one telling her, “Lady, you’re delusional.” Another social media user asked her mockingly, “Who would buy that?”

A third person accused Dolezal of editing her comments: “You must be deleting the negative comments because they can’t only be people agreeing with you comparing your book to Michelle Obama’s.”

A few years ago, after Dolezal’s parents went to the media to reveal her true racial makeup, which is of European ancestry, she was almost immediately ousted from the NAACP. She was also fired from her position as instructor of Africana Studies at Eastern Washington University and removed by the Spokane City Council as Chair of the Police Ombudsman Commission as a result of “a pattern of misconduct.”

In May 2018, Dolezal was arrested on welfare fraud and perjury charges. Though her trial was supposed to begin toward the end of 2018, there has been no word as to when it will actually commence. Dolezal pleaded not guilty to all charges back in June.

For those who may not remember all of the details of how Dolezal perpetrated a fraud, click here to see a refresher, courtesy of ABC News’ YouTube page.