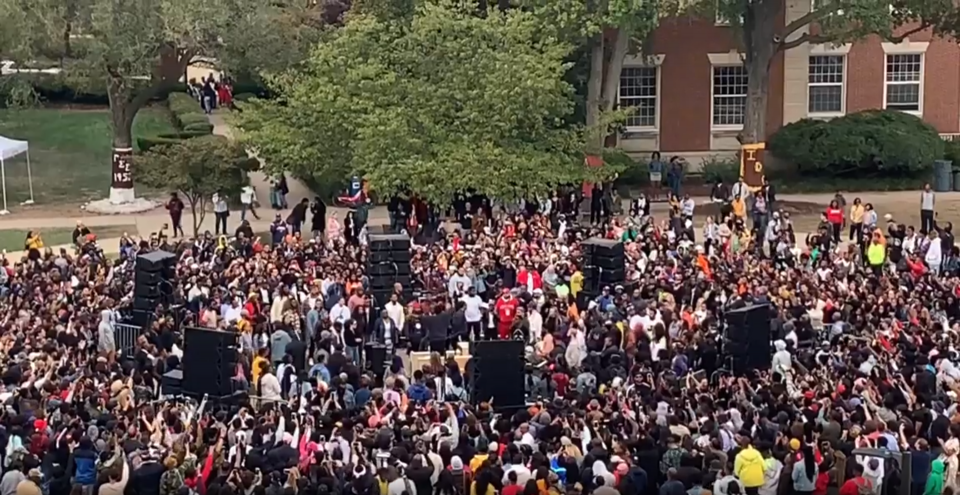 Kanye West took his mobile Sunday services to legendary HBCU Howard University in Washington, but not everyone supported the event.

Kanye, 42, who has been blistered for being an avid advocate of this current White House administration, pulled up at this historically black college and university during the institution’s homecoming for singing and praise.

While there was a substantial turnout for the 8 a.m. service, there was a pocket of social media resistance to Kanye’s appearance that included his wife, Kim Kardashian-West, 38, and at least one of their children.

Greg Carr, an associate professor at Howard’s Department of Afro-American Studies, wanted someone to direct Kanye to the nearest campus library after the services were over.

“I have some books for him,” he wrote on Twitter, followed by the hashtag #TheMiseducationOfTheNegro.

Keneshia Grant, also a professor at Howard, tweeted her opinion about the performance.

“This Kayne church thing makes me uncomfortable. There, I said it,” she wrote.

Writer Frederick Joseph tweeted his displeasure of the school’s embrace of West.

“Can’t blame Kanye anymore, he’s shown us who he is. Black people need to stop making space for his anti-Blackness,” he wrote.

Kanye West arriving for a surprise Sunday service concert with gospel choir at the yard at Howard University. Students got emails at 6 am this morning. pic.twitter.com/9JIgSFpYEa