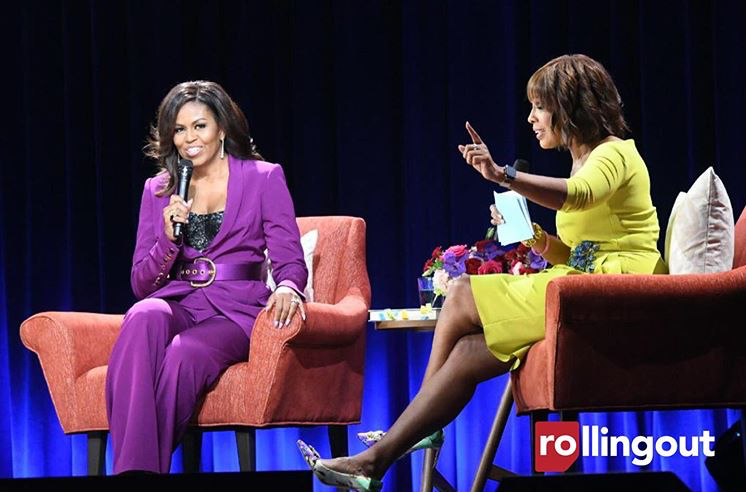 Based on Michelle Obama’s all-time bestseller Becoming and her place as one of Time magazine’s 100 Most Influential People, she has no problem getting young people to listen to her and follow her lead.

The former first lady, 56, used her prom photos to inspire student voting with the #PromChallenge hashtag.

“Throwing it back to my 1982 prom night and this pink satin, polka-dotted dress,” Obama tweeted on Tuesday. “Join the #PromChallenge with When We All Vote and MTV and tell us what your school is doing to register students to vote. You could get a free prom for your school!”

Throwing it back to my 1982 prom night and this pink satin, polka-dotted dress.

Join the #PromChallenge with @WhenWeAllVote and @MTV and tell us what your school is doing to register students to vote. You could get a free prom for your school! Learn more: https://t.co/ggVjRpS3CU pic.twitter.com/x5lP0LHOUf

According to BET.com, The Prom Challenge is a program created by Obama’s “When We All Vote” and MTV to inspire more students and young people to become a part of the electorate. Obama and the partners will pay for the proms of the 20 high schools around the country who best exemplify the ability to creatively integrate voter registration drives at their schools.

The winners of the competition will receive up to $5,000 for their prom. The deadline for the schools to submit their applications is March 13.

Tracee Ellis Ross, 47, best known for starring in the classic sitcoms “Girlfriends” and “black-ish,” joined Obama in her efforts.

18 yr old me in ‘90 ready for prom in this @armani dress, bangles & shoes. Prom was fun, but my 1st time voting was life changing.⁣ If you're a student or teacher, join @WhenWeAllVote & @MTV’s #PromChallenge & u could win a free prom for your school!⁣
⁣https://t.co/DalCN0ha9K pic.twitter.com/YoOAYDBFJO

Kerry Washington, 43, best known for her starring role in the blockbuster weekly TV drama “Scandal” and movies such as Django Unchained, also lent her support to Obama.

It’s not Thursday but I’m throwin’ it back…to prom! Well, one of em. I went to a few🤣😂 #PromChallenge (I 👀 you @MichelleObama!)@WhenWeAllVote & @MTV are registering students to vote and they might just help YOU throw an unforgettable prom. Sign up👉🏾 https://t.co/BCA9MRa1TL! pic.twitter.com/yXviAjFpBr

The New Orleans-born DJ Khaled, 44, whose full name is Khaled Mohamed Khaled, is also getting behind this effort to infuse energy into the young electorate.

Bless up @MichelleObama @WhenWeAllVote and @MTV

Young world! You can win up to $5K for your prom with the #PromChallenge

.@WhenWeAllVote & @MTV are challenging students and teachers to find the most creative ways to register voters at your school.