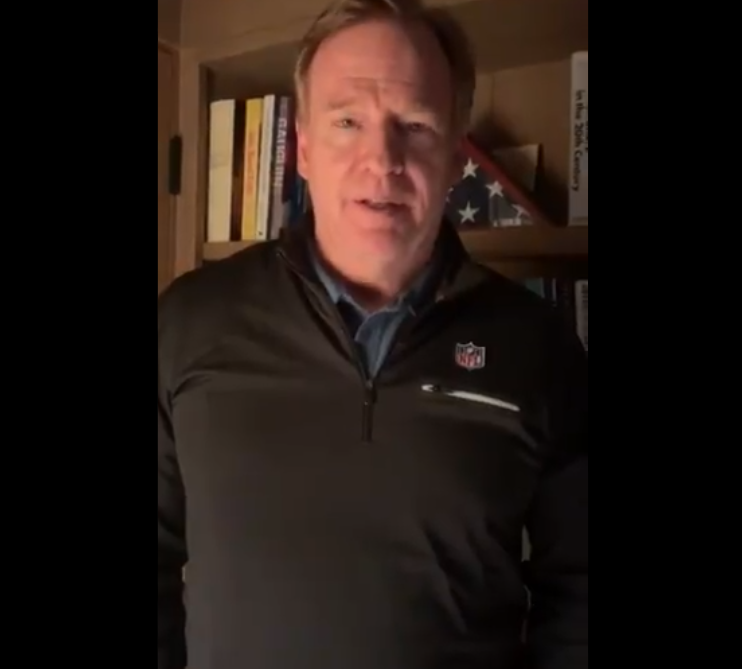 The National Football League got put on blast by celebrities after it offered condolences for the police-involved deaths of George Floyd, Ahmaud Arbery and Breonna Taylor that have inspired a nationwide insurrection.

Outspoken journalist Jemele Hill, a former sports reporter for ESPN, was particularly incensed that NFL Commissioner Roger Goodell has the audacity to even mention Floyd’s name. Floyd’s death at the hands of the police represented the very reason exiled quarterback Colin Kaepernick knelt during the national anthem. And it was terribly ironic that Floyd seemingly passed away after the ex-Minneapolis officer suffocated him by kneeling on his neck.

In a tweet delivered on Saturday, May 30, 2020, the NFL and Goodell offered pedestrian platitudes that sounded like recycled statements from previous unrests in America.

Hill landed the first and most vicious blow at the NFL as she conveyed her disbelief that the league would try to take the moral high ground on this explosive issue:

“You gotta be f—ing kidding me,” she said simply to the above tweet.

In a second tweet, Hill, who now writes for The Atlantic, elaborated on her thoughts and compared the NFL’s stance to the spy agency that allegedly helped neutralize Martin Luther King Jr.

“The NFL tweeting about what happened with George Floyd is the equivalent of when the CIA recognizes Dr. Martin Luther King Jr.’s birthday. Loved him so much y’all helped to kill him. Get outta here with the bull—-.”

Superstar Hollywood director Ava DuVernay also landed some harsh blows against the league. The director of When They See Us, Selma, OWN’s “Queen Sugar” and A Wrinkle in Time accused the league of being unprincipled and posting that dubious tweet to ingratiate themselves with the loyal Black fan base.

Shame on you. This is beyond hollow + disingenuous. This is a lie. Your actions show who you are. You’ve done nothing but the exact opposite of what you describe here. Keep Mr. Floyd’s name out of your mouth. Shame on you + the “consultants” of this travesty of an organization.

Until @Kaepernick7 is signed, the ENTIRE @nfl needs to shut their damn mouths. Everyone needs to boycott these racist owners who made peaceful protest impossible.

Other celebrities weighed in on the mushrooming chaos in America, including this classic response from actress Reagan Gomez to sports anchor Dick Vitale’s plea for another Martin Luther King Jr. to appear on the scene.

“To murder him again?” Gomez asked incredulously. “White America s— their pants when Kap silently knelt. Stop asking (murdered) Black ppl to save White people. YOU DO SOMETHING.”

Don’t f*ck with me today, people. Today is not the day!

We’ve seen this in South Africa before. Beware of agitators and instigators who use legitimate protests to ignite chaos between protestors and police.

The United States of America has no President.

Far-Right Extremists Are Hoping to Turn the George Floyd Protests Into a New Civil War https://t.co/RtF4cg1SRv