Jill Scott may not sport the type of avid, drooling-at-the-mouth fan base that Beyoncé and Nicki Minaj and others have encircling them, but that does not give you permission to come after the beloved “A Long Walk” singer without cause or provocation, as one ex-NFL player learned the hard way.

Kyle Queiro is the ex-NFL player who, according to his Instagram account, is quite fond of his own face as every single photo is a close-up of himself. He used Twitter on Saturday to express how dumbfounded he was that fans find the singer-songwriter attractive or beautiful.

“People are attracted to JILL SCOTT!?” Queiro actually printed, emphasizing her name in all-caps. “So it’s an energy thing. Got it. & by no means she is ugly. But y’all really sexually aroused by her huh?”

The backlash quickly rained down on Queiro in a torrential downpour of righteous indignation.

We need to go into concussion protocol for this dude @Kyles_Style. How the hell are you going to question sexiness of the Goddess Jill Scott? 😑 pic.twitter.com/0au8Wk6diy

A second person flamed Queiro with: “Jill Scott slander will never be tolerated. Just say you like white women and go.”

Others quickly piled on and pounded Queiro.

After a few hours of being charbroiled over the hot Twitter grill, Queiro changed his tune. 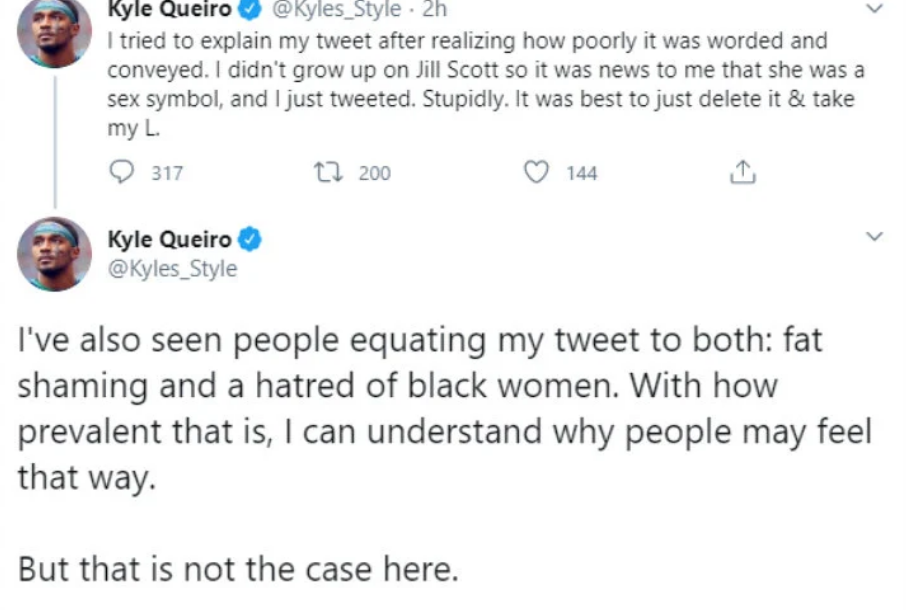 Queiro found his mea culpa was woefully insufficient to quell the ire as he deleted this post from Twitter as well.

The “Golden” singer, in response, did not even address Queiro’s infantile and petty tweet, but instead leveraged the opportunity to advocate for slain innocent victim Breonna Taylor.

Scott later acknowledged that the wave of compliments and positivity toward her was gratifying.

Later on, the thoroughly shamed gridiron player came back with quite an eloquent apology that not only addresses his transgression but also pays homage to Scott.

Check it out on the next page: