Pastor John Gray met the wrath of Black Twitter after revealing he cheated on his wife again.

The famed South Carolina pastor of the Relentless Church took to Instagram on Friday, Nov. 6, 2020, with a post honoring his wife, Aventer Gray. With her photo, John Gray included a lengthy caption as he revealed he “sat down from leading” his flock a few months ago because his “life wasn’t in order.”

“A few months ago I sat down from leading at Relentless. My life wasn’t in order. Church isn’t first. My wife is. This is my wife. She is from God. She is a life giver. She is a kingdom builder. Her name is Aventer,” Gray’s post began.

At one point during the post, Pastor Gray suggested that he cheated on his wife emotionally. Although Gray made it clear he did not cheat on his wife physically, his post was met with speculation and criticism, as many noted that he suggested he had an emotional affair.

“Although you are the only woman I’ve ever slept with, emotional unfaithfulness is just as wrong,” he wrote. “Sin is sin. People want to minimize one sin over another, when it all can get you sent to hell.” 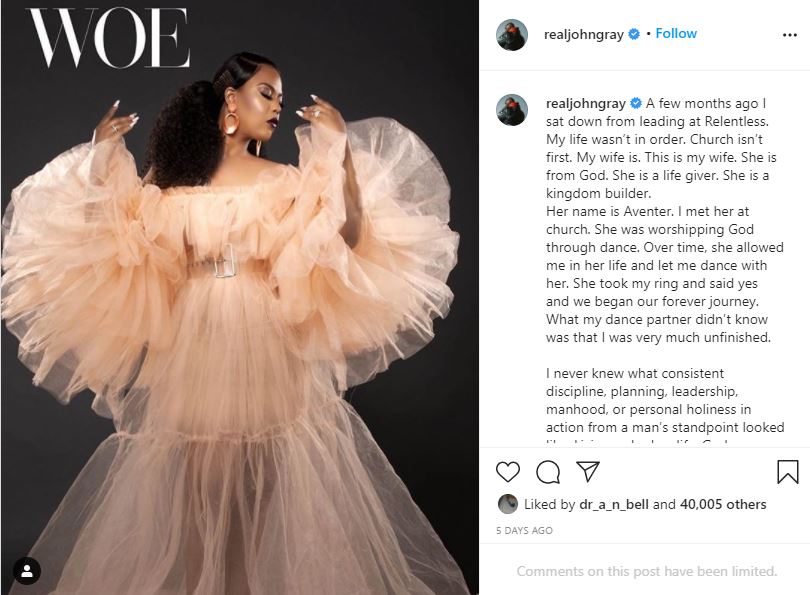 Wait John Gray cheated again?? I thought y’all were bringing up the one from before?? That man will lift his stomach up for anybody!

When does John Gray actually have time to be a pastor?! He's always announcing an affair. pic.twitter.com/KujT2c7brh

It’s actually time for John Gray to be sat down for a while. Because, if this is his response to his third apology tour, it’s clear he’s not equipped for this. He needs intense therapy and somebody to tell him that his narcissism covered by godtalk is embarrassing everybody. https://t.co/arfIW9fLAb

Despite the backlash, Gray has reiterated that he is a work in progress committed to improving his marriage.

Go to the next page to read Gray’s post in its entirety.