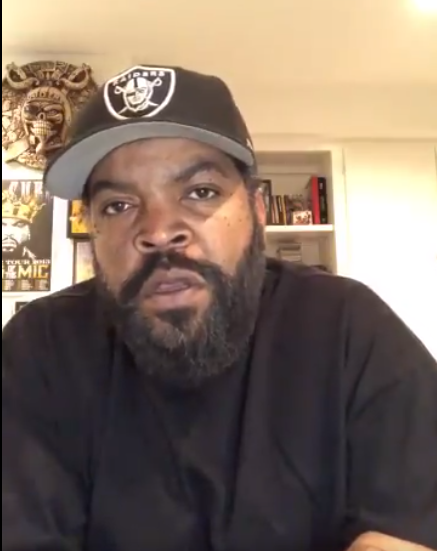 A somber Ice Cube returned to social media after taking a sabbatical in November when many Black Americans viewed his work with Donald Trump as grievous and even treasonous.

Cube, 51, remains unbothered and unapologetic for attempting to push his “Contact With Black America” through to both leaders of the Democratic and Republican parties.

The man born in Los Angeles as O’Shea Jackson believed his work was being deliberately misinterpreted by many Blacks and exploited by the current presidential administration. Cube, therefore, decided to retreat from the “noise” and “poison,” take a self-imposed moratorium from public view, and wait until the verbal debris fell to the ground before he came back out.

The architect of the enormously successful Friday and Barbershop movie franchises said he has modified the Contract With Black America and is continuing to work behind the scenes on behalf of Black people.

“Yeh, yeh, what’s up! It’s your homey, Ice Cube,” the rapper-director-producer began his soliloquy. “I know a lot of people been wondering, you know, where I’ve been. You know, um, I was real active before the election, talking about what’s needed, specifically for the Black community.

“About 10 days or two weeks before the election, I pushed back, you know, all the way until pretty much until now because I just felt there was a lot of noise, a lot of poison, a lot of people with they own agendas, personal agendas, um, or party agendas,” Cube continued. “And, you know, they really wanted to attack me for what I was doing because it was outside of the line of what they was doing or what they believed need to be done.”

Where the hell has Ice Cube been? pic.twitter.com/9lORsyC1KG