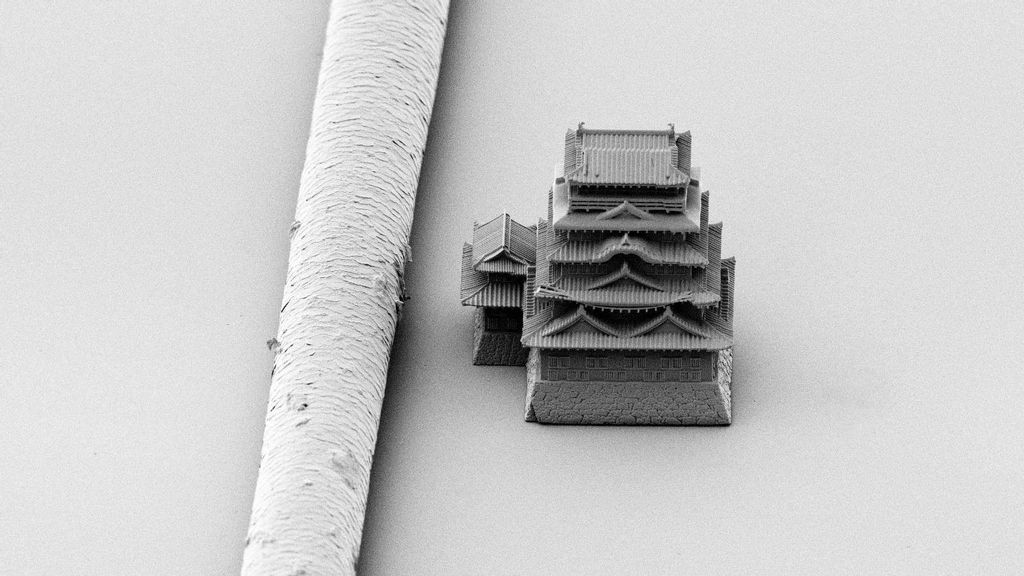 This incredible model of a Japanese castle is so small it is about the thickness of a human hair, as can be seen in this image.

The 0.217-millimeter model of Fukuyama Castle is so tiny, it is all but invisible to the naked eye and it was made by a precision metal parts manufacturer in the western Japanese city of the same name to celebrate the 400th anniversary of the castle being built.

Castem Co. in Fukuyama, in Hiroshima Prefecture, created the miniature model on a scale of 1/170,000 of the actual castle tower, which measures 33.5 meters in height, using a special 3D printer in cooperation with the Kyoto University of Advanced Science in the city of Kyoto.

Yuki Toda, the 34-year-old general manager of the company’s new business division, explained: “We infused manufacturing’s playful side into the world’s smallest model of Fukuyama Castle.”

Castem boasts advanced metal casting and fine processing technology and has used 3D data to reproduce stainless steel models of paper cranes folded by the late Sadako Sasaki, who was exposed to the atomic bombing of Hiroshima. It also made a 1/250-scale Fukuyama Castle key chain.

For about the past two years, the company has been working together with the Kyoto University of Advanced Science to develop technology in the fields of 3D scanning and materials, and to produce medical supplies.

The miniature Fukuyama Castle model was made to be about the same size as the thickness of a strand of hair using the university’s 3D printer and a special resin, and its surface was coated with platinum. When looking at the model under a microscope, it is evident each of the tiles and the stone walls have been precisely crafted.

If the material is processed further, it is apparently possible to reproduce Fukuyama Castle with a height of 0.2 micrometers, which is 1,000 times smaller than the current miniature model.

Fukuyama Mayor Naoki Edahiro was reportedly impressed after observing the model under a microscope and said: “It is encouraging to see the display of Fukuyama’s high-level technology. I want to exhibit it at Fukuyama Castle Museum, which will open following renovation 400 years after the castle was built.”

The castle, which was the capital of the Bingo-Fukuyama clan, was built on a hill on the Fukuyama plain, with construction started in 1619, during the Edo period.

The castle, which is seven stories tall, was completed in 1622 on the orders of the Tokugawa shogun and was surrounded by double moats, which provided an inlet to the Seto Inland Sea.

The Mizuno clan maintained control over the castle from its construction until 1700.

It suffered extensive damage from Allied attacks in World War II when most of the buildings were destroyed and the dry stone was later removed before the main tower was later restored using concrete.