NFL star Antonio Brown struck with a savage backhand at singer Keyshia Cole’s overtures when she said she “misses” him on Instagram.

Cole fueled speculation that the two of them were dating when she posted several photos of them together in the weeks after she was featured on AB’s latest song, “Don’t Leave.”

Well, it appears that AB has left Cole in the dust and in her feelings when he reposted her showing off a tattoo of his initials “AB” on her lower back by dissing her publicly. He claims that he had sexual relations with her and then quickly moved on. 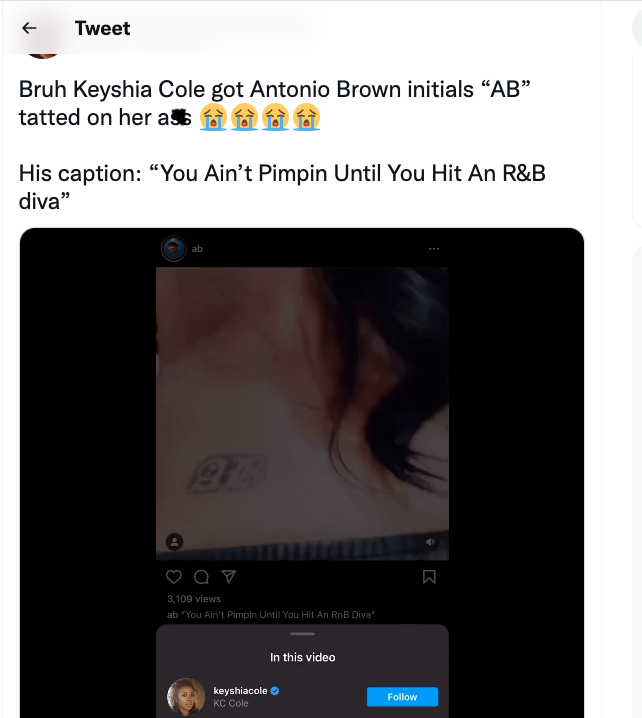 In the comments section, Keyshia wrote to AB,

“This the second time you posted this @AB but the captions changed. Don’t be mad at me no more babe, I said I apologize.”

Saying that Brown was being “a little harsh,” Cole explained in another IG video that she identified with his pain and trauma as Cole lost her mother, step-father and beloved pet within a six-month span in 2021.

“Let’s keep it gangsta! You know what, I saw a Black man that is going through the motion. I’m not a Black man, but I identified with how [that] can be. He might not care about that, I don’t know. I don’t know, you know what I’m sayin’?”

Cole then added to her comments on the video:

“I think he made it very clear that he didn’t want to receive it. He was like, ‘Baby I like you,’ at first and now, I think maybe that’s just what it is. My point wasn’t even for that to be like, for us to discuss that more. It was just that — it was harsh. It was a little harsh … Maybe he don’t know that it was a little harsh for him to say that.”

Once again, AB came back at Cole harshly when she said she was providing understanding and camaraderie as he’s endured a tumultuous end to his NFL career.

While AB is not seen in the video, his easily-recognizably raspy voice is heard:

The mother of two later took to her Instagram story to say she was “trippin” and wrote:

“Yea I was big trippin smh I see it now … I have a 12-year-old. Like that type of disrespect for what,” she said. “Nothing is worth that level of disrespect. Especially when you don’t deserve it. Had so much love, respect, and admiration [for] you. Guess that wasn’t mutual either.”

When one of her fans made fun of AB by saying many folks don’t want him either, Cole classily refrained from giving AB the same energy he gave her. 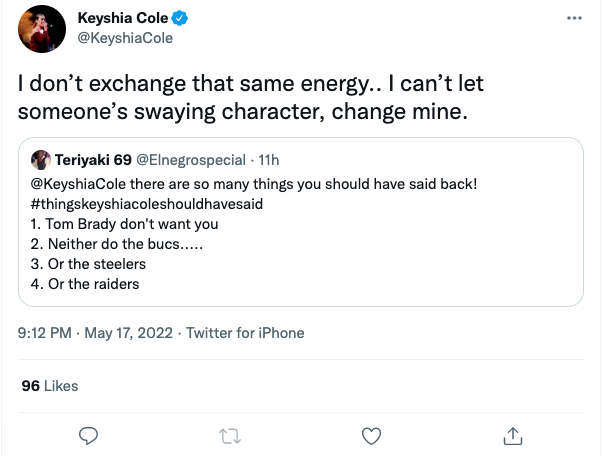 Below is the song and video that AB and Cole recorded together. It was released in April 2022.