The police in suburban Atlanta have issued an arrest warrant for the suspect in the shooting death of rapper Trouble. He was 34 years old.

The emcee who was born Mariel Semonte Orr was shot to death when a male gunman broke into the home of the woman Trouble was visiting and began shooting in Conyers, Georgia, about 25 miles east of Atlanta. According to Atlanta’s 11 Alive news outlet, Rockdale County Sheriff’s spokesperson Jedidia Canty said Trouble was pronounced dead at approximately 3:20 a.m. after being struck once in the chest.

Local authorities were able to quickly piece together what took place and have issued an arrest warrant for Jamichael Jones, 33, of Atlanta, who is now on the run.

Exactly why Trouble was targeted remains a mystery. However, Jones, according to the sheriff’s department, knew the woman that Trouble was visiting, and was previously involved in a “domestic situation” with her, though they did not elaborate on what that entailed. Authorities added that Jones and Trouble were not familiar with each other.

Meanwhile, Trouble left a few chilling thoughts on Twitter just weeks ago as almost an omen to what transpired this past weekend.

“Its tooooooo many 12 of for me tonight IM GOIN HOME,” Trouble penned.

Trouble’s music family at Def Jam issued their condolences to Trouble’s surviving family and friends who knew he had a bright future.

“A true voice for his city and an inspiration to the community he proudly represented,” the post read. 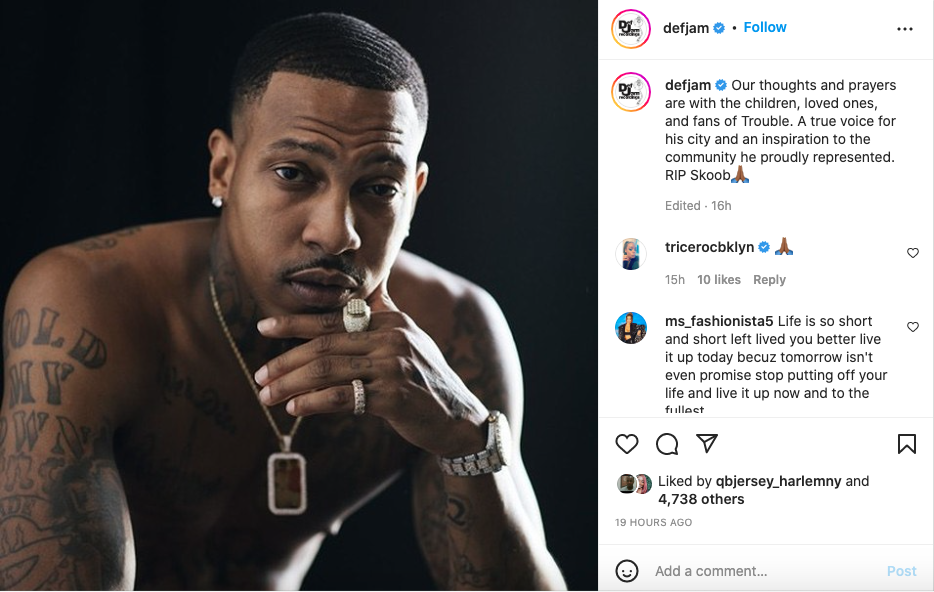 Officers indicated to the television station that they are searching the places where the suspect Jones is known to live and hang out at in an attempt to apprehend him.

Listen to the full report below: