Couple sells everything to take baby on world tour 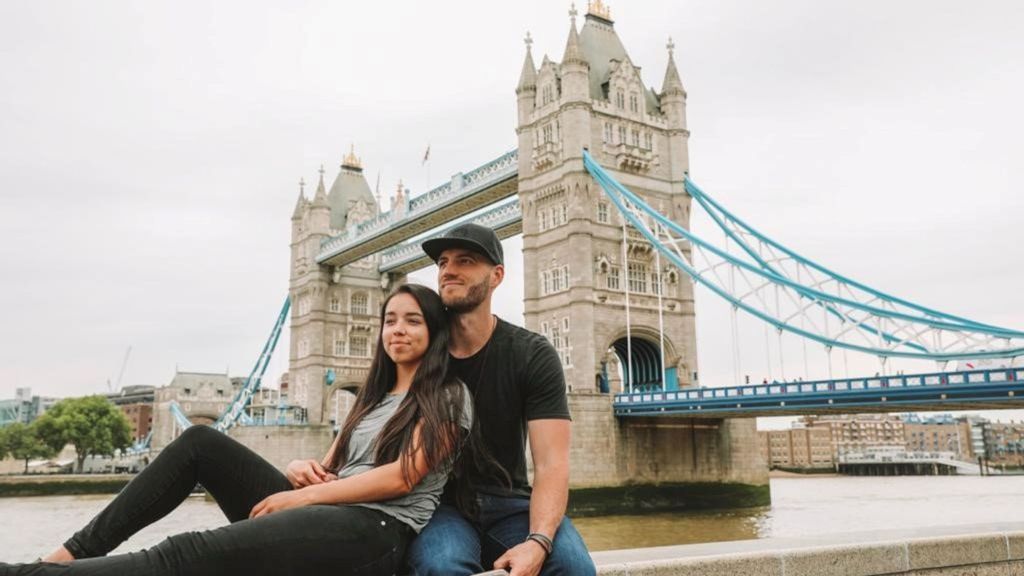 A couple sold everything they own to visit every country in the world – with their baby in tow.

Chloe Egbert, 28, and her husband, Jordan, 31, quit their jobs and sold their home, car and belongings to fund their $62,000 trip around the globe.

The couple jetted from their home in Orem, Utah, and headed to France in May 2019 and then visited Malta, Italy, and Switzerland.

They have since welcomed their son, Lennon, 18 months, who joined their travels at 12 weeks old.

The family has checked off 106 countries so far. They are currently in Andorra and will be heading to Monaco in six days.

Egbert, a former executive assistant, originally from Las Vegas, Nevada, said: “We wanted to take control of our own future.

“We sold everything we owned to fund our trip and want to show our son the world.

“Jordan got a job at an electric vehicle company in March 2018. They were opening in Europe, so we had planned to live in Austria for two years.

“But while he was training the company was declared bankrupt.

“We decided to still go ahead and move abroad – but rather than staying in one place, we wanted to see as much of the world as possible.”

They traveled to Papua New Guinea, Samoa, and Tonga, before the pandemic and travel restrictions put a halt to their plans in March 2020.

Egbert said: “We were in Tuvalu in the South Pacific and when we landed, we went to border patrol where they told us we couldn’t come in because we were American.

“They worried we would have coronavirus – so we had to prove we hadn’t been in the U.S. for months, then they allowed us in – but we were told we had to leave straight away.”

The couple then headed to Padre Burgos, in the Philippines, where they went swimming with whale sharks and relaxed on the beach.

The small town of Padre Burgos is located in Quezon Province and bears the name of a Catholic priest who was accused of mutiny and executed by Spanish colonial authorities in the 1800s.

But disaster struck when the President of the Philippines, Rodrigo Duterte, announced that there would be no domestic travel for 24 hours to try to contain the spread of COVID-19.

Egbert said: “We then flew to Manila and again the President said that all foreigners had to leave within 72 hours – otherwise we would be stuck there.

“All public transport was closed. We were very lucky we were staying in a hotel right next to the airport.

“As soon as the President made the announcement we were trying to get down to Micronesia and our flights got canceled.”

The couple realized their travel plans were coming to a stop and decided to head back to the U.S.

They spent the pandemic in Hawaii, where Chloe got pregnant and gave birth to their son, Lennon, in February 2021.

In September 2021 they jetted off once again – this time heading to South America.

Egbert said: “It was hard to go back traveling. We were going to places where masks were still in force and attractions were closed.

“The rules were so strict, by November I was miserable. I had a baby that couldn’t sleep unless he was on me.

“I couldn’t do anything in the countries we were in as they were so strict – there was nothing to do, everything was closed.”

Egbert then pulled the plug on traveling and moved the family back to Las Vegas, Nevada, where she suffered a health scare in April 2022.

She said: “I ended up having 20 kidney stones. I got surgery to get them out and I realized that life is too short.

“We booked the next flight from Las Vegas to London in June 2022.”

Egbert said: “It was so nice to be back at the tennis. People were out, excited and happy everything was normal again. That’s the moment I realized we could do it again, travel was back and happening.”

While jetting around the world, the couple are working with brands as content creators.

Since traveling, Egbert has visited 106 countries and said that New Zealand is her favorite destination.

Egbert said: “There is an energy in New Zealand that I have only felt in Japan and Andorra.

“New Zealand is so pure and comfortable, as you can imagine my life is the least bit comfortable and New Zealand brings the comfort.

“Kiwis are crazy, they are the biggest adrenaline junkies and I love it.”

After traveling the world since 2019, the couple have picked up some useful tips and tricks along the way and say most of the strangers they encounter are ‘good people’.

She said: “One thing I always tell people is that the news is solely for information.

“Good news doesn’t always catch attention, do not define a country by its government and remember that people are good.

“We have experienced so much goodness over the world and very little bad.”

One top tip from Egbert is that when traveling, you should stay loyal to one hotel.

She said: “We believe in staying loyal to one hotel, loyalty absolutely pays off, we are very loyal to Marriott Hotels and because we have stayed two years almost 500 nights and have reached the highest levels of status with them.

“Every Marriott we stay in, we get a free breakfast, room upgrades and late checkout – we are always treated like family.”

The post Couple Sells Everything To Take Baby On World Tour appeared first on Zenger News.