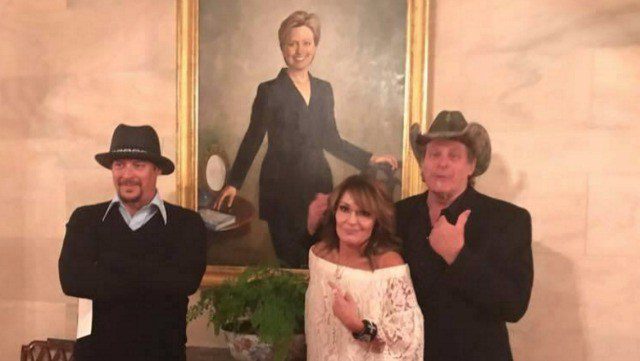 Kid Rock, Sarah Palin and Ted Nugent went to the White House for dinner with President Donald Trump on Wednesday night. There was swift blasting of the trio when they took a picture in front of a portrait of former first lady and Secretary of state Hillary Clinton. It’s hard to believe now that Kid […]

Ted Nugent: ‘I hang around with a lot of n—— and they use the word’

Rabid racist Ted Nugent going off on bigoted tirades may seem like a recent phenomenon. But according to a 24-year-old interview that is now posted online, the uncouth Nugent has been dangling off the racial cliff for a long time. Excerpts from “Ted Nugent Grows Up? Older, Bolder, Cruder, Ruder — And More Unprintable Than […]

Race-baiting rocker Ted Nugent is not even trying to hide his prejudices anymore. In his latest nonsensical diatribe against President Obama — again — the Michigan madman referred to the commander in chief as a “subhuman mongrel” and “chimpanzee.” The wannabe political commentator was being interviewed by guns.com when the lunatic unleashed invectives that were […]

Rocker and racist rabble-rouser Ted Nugent is making a second career by touring the country and calling Trayvon Martin a “thug” and “gangsta wannabe” who “got what he deserved.” The right-wing goon is regurgitating the explosive editorial he penned for the conservative website, Rare, in which he says “non-racist Americans” celebrated the acquittal of George Zimmerman for […]

Stevie Wonder’s famous boycott of Florida and Stand Your Ground laws is getting some serious push-back from the radical right. Rocker and rabid right-wing extremist Ted Nugent slammed the music icon during a radio interview, calling him “brain-dead” and “soulless” for his Florida boycott, all while throwing around erroneous numbers about black-on-black crime in murder […]

Ted Nugent: ‘I am Rosa Parks’ and other crazy quotes

Washed up rocker, draft dodger and gun owner Ted Nugent is about to embark on another anti-Barack Obama campaign couched in “concern” for African Americans, and he’s calling it the “Ted Nugent Black Power 2013.” Seriously, folks. He’s actually going to call it that. Nugent, whose extreme disdain for President Obama is well-known, rationalizes the […]

Ted Nugent, the crazed, right-wing, gun-toting, Obama-hating rocker who was visited by the Secret Service last year for making reckless statements about the president, has now gotten even more outrageous when he says Obama is “engineer of the destruction of black America.” In the same inflammatory column he wrote for the far right website, WorldNetDaily, […]

In light of the senseless, horrible tragedy at Sandy Hook Elementary School in Newtown, Conn., the ferocious debate about whether to enact meaningful gun control measures, especially as it pertains to machine guns, assault weapons and unlimited ammunition, has been reborn. Of course, there are those who oppose any and all measures meant to compromise […]

Rocker Ted Nugent wants the voting rights of all people on welfare revoked until they become self-sufficent. This is just one of the bizarre and radical statements he made in his op-ed column at the Washington Times. He also said federal lawmakers should obliterate Social Security, Medicare and Medicaid. Nugent claims the debt and spending […]

As expected, several Republicans were upset, pressed and heartbroken on Tuesday, Nov.6 when President Barack Obama was re-elected as our nation’s 44th president. One conservative in particular, an Atlanta clinic worker, took her anger and blasted it on the web, as she called Obama a “d–n ni—er” after he was re-elected. But, while the president […]

President Obama’s sworn enemy, Ted Nugent, is no longer an asset to the Republican Party — if he ever was  in the first place — after he profanely offered oral sex to a male reporter to prove that he’s a nice guy. Nugent ripped off a nonsensical tirade with a male CBS news reporter during […]