“I just want people to see the real me … so when it’s time for you to share this with the world, make sure that I look as natural as possible. They have to really see me.”

These words spoken by Eva Marcille at the conclusion of her rolling out cover shoot lingered in the air of our photography studio for several days.

“You want people to see you?” I kept asking images of Eva while staring at post-shoot images on my computer screen. After much consternation, I asked myself what that means in a society that’s completely obsessed with plastic surgery, Photoshop, and photo filters.

For Marcille — a former “America’s Next Top Model” winner, current actress and burgeoning entrepreneur — it simply meant living her life without the façade that Hollywood tends to provide. So, after a decade plus of trying to be perfect in an industry that literally demands it, Marcille had finally had enough.

Eva Marcille Pigford had finally found her true voice. And we were there to bask in its unadulterated realness. 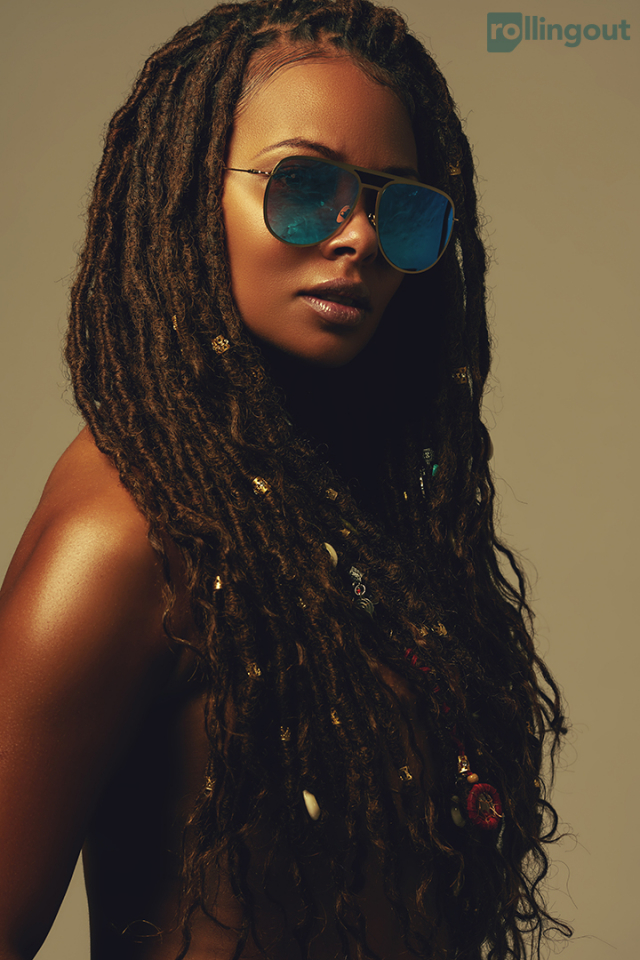 You’ve had a lot going on: from TV to eyewear, to blossoming as a mother. Talk about the evolution of Eva as a personality.
Starting in this business on America’s Next Top Model, the world has kind of seen my evolution. You saw me as a teenager trying to jump into adulthood to start modeling and create my empire. You saw the rough and rugged Eva. That’s who everyone was introduced to. Now, 13 years later, you see the evolved Eva. The mother. The entrepreneur. The life-lover. The pro-Black liberator. The happy person.

And it’s so cool to be in this space. I can remember where I was. Not just physically, but where I was emotionally as a person. And I think it’s indicative of the journey that we take in life as a people. Who I was 10 years ago and who I am today are completely different people. Not my foundation, because my foundation will always be the same. I am a Black woman who loves who I am and loves my roots. But more so the understanding of life that happens through experience and time. Becoming a mother and being an entrepreneur. The entertainment industry creates either a monster or it creates beauty. And what it has instilled in me is this drive. It coincides with this “American Dream,” that you truly can be who you want to be. And so I live my life with no limitations, no regrets, no ideas with who I’m supposed to be, but truly living in who I am.

When did you arrive at this place where you realized you were happy with who you are?
It takes a lot of soul searching. A lot of it has to do with my spiritual walk and my journey, growing closer to God, and understanding my true purpose on this Earth. All that I physically am is not me; it literally is just a capsule for my soul. And my soul is so great; that’s why the outward looks the way it does. So understanding that my true leftovers in life are not about what I did, but how I impacted the people by what I did. I think it had a lot to do with my daughter … having a young Black girl, who is going to be in this crazy world. Trying to figure out not to just instill in her, because you can tell somebody anything, but your walk, your life, the way in which you move is truly the lesson. So, I try to lead by example. I try to be the woman that I want her to be. For example, my favorite curse word was b—-: “B—- this, b—- that.” Now it’s “girlfriend,” because I don’t want my daughter saying those words. It’s the little things that you see in life that help to create the woman that you are, and that’s where I am.

You have always been someone who isn’t afraid to speak her mind. How does that work in the entertainment industry where people might not always want you to express that?
It’s so funny. I’m the only girl that was actually managed by Tyra after doing “Top Model.” I remember her saying to me one day, “You know, you’re really aggressive.” And I’m like, “No, I’m not. I’m assertive.” And she’s like, “No, you’re aggressive. You think you’re assertive, but you’re aggressive.” I wanted to show the world and just live in my truth as a woman and as a person. But I realized that it was coming off slightly abrasive. There’s a middle-ground that you find between staying true to you and being able to allow other people’s truths, which are different than yours, fit in your world, too. And that’s when compromise comes in. I’m myself; I always will be me. I’m a Black girl, born to Evan and Michelle Pigford; that’s who I am. But my ability to be in this entertainment industry that might have different fundamentals than me is not as difficult as it was before because I stay grounded in who I am. I compromise when it pertains to the business side of things. I might want it this way, but it can’t always go this way. That’s just life. You find a way to get a little bit of yours and give this person a little bit of theirs so everyone is happy. And that’s how you manage a relationship. So I consider my place in Hollywood a relationship. That’s how I manage that. 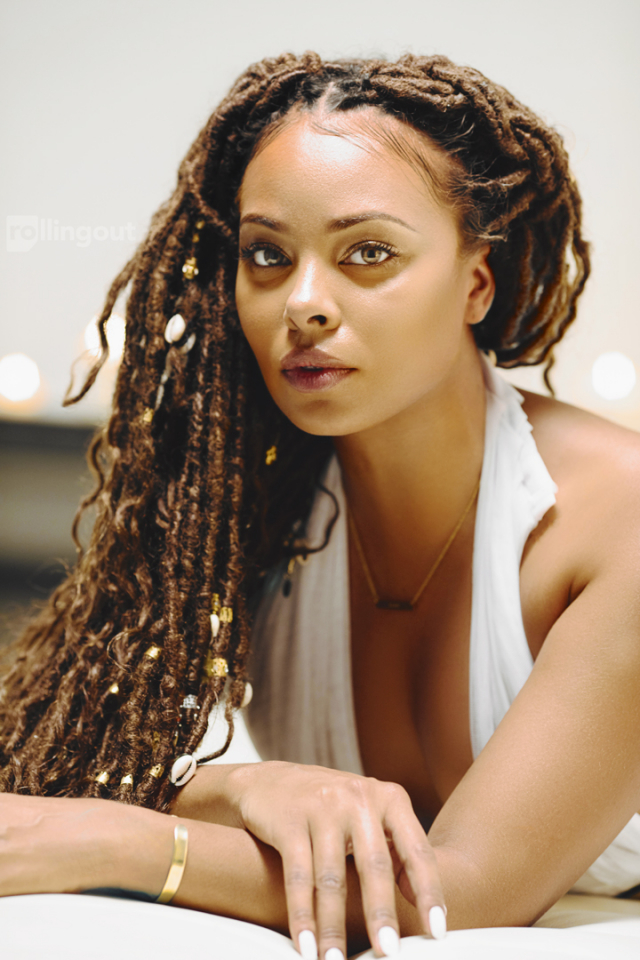 What do you feel you gained from having Tyra personally manage you so early on in your career?
Having been groomed and shaped by the beautiful Tyra Lynne Banks was priceless. It’s something that many can’t say has been their reality. On top of the fact that, her experience in life and what she imparted to me is kind of like that thing where your mom says, “I went through it so you don’t have to.” So being privy to Tyra’s journey and her mentorship, I learned a lot from her. Not just being a pretty face, but understanding that this is a business, and you have to rock this business. She instilled something in me that most don’t get, especially in this new social media age. There are pros and cons. It’s beautiful; you can learn about things you’ve never heard about. But then there’s this other part of it that’s unreal. How women look, how men look, how bodies look and are expected to be is not true. And so she instilled in me a level of truth. She taught me that this is all smoke and mirrors. None of this stuff is real, and to find your truth in that. So now, at 32, I find myself not going full Alicia Keys — I’m not going to show all the freckles — but stripping off the extra accoutrements that make us look glamorous and coming down to the real because that’s what’s relatable. That’s what the girls of today’s world need to see. Don’t get me wrong, the beautiful Kardashians and people like that are great, but they’re not relatable to all women. It’s definitely not relatable to women of color. So [Tyra] taught me to live in my truth. I’ve been rocking locks for over nine months now, I wear a lot less makeup, and I wear clothes that I like — not clothes that make me look “sexy.” You’ll find out that you can still be sexy in a baggy pair of pants and a sweatshirt. And, hopefully, those that follow me can learn a little bit about their own beauty that they might not even realize that they possess.

You mentioned wanting to open Black women’s eyes to learn more about themselves. With “Black girl magic” and “stay woke” serving as really popular catchphrases, do you think that we’re on the verge of Black people opening their eyes or do you feel like it’s just a fad?
Today’s American society is at a place where we need liberation. For Black people, who basically created this country and are living in the country that we never felt a part of, I feel like what’s happening now politically and socially is the rebirth of civil rights. In the ’60s, they fought, they got killed, they were beaten, and they got jailed. So then in the ’70s and ’80s, we were able to gain from what happened in the ’60s. We had the ability to go to college, where we might not have been able to before with different acts and bills that allowed us to do so. I think a lot of us just felt like, “We’re good now.” We can go to Ivy League schools and drive nice cars. But I think what happened with this new election is the unveiling of the truth of America and the truth of where we still are. What it has done more to the millennials than anyone, is [awakened them]. When you used to look at magazines and television, and nothing looked like you. That’s not the truth anymore. We have Issa Rae doing “Insecure.” We have rolling out setting the trends. So, I feel like my job in this movement is to help to empower and to encourage. It’s not an easy fight. My job is to let my sister and my brother know that I see them, I have their back, and I stand with them. We are not subhuman, or second-rate, or second-class. We are beautiful people. And I feel like we are just learning that as a Black culture, and even Latinos, and Middle-Eastern people, and all these beautiful cultures that make up America, it’s the difference that makes us great. Where we all tried to fit into this mold for so long, it’s no longer about fitting in. It’s about being different. I think when we learn to accept that is when we can truly grow.

Let’s talk about 2017. What are you excited about?
I’m super excited about so many things: the fact that I made it to this year, the fact that I have an amazing new eyewear line. The feeling of creating the product, and being able to display what I want to display. There’s something liberating when it is your product, your creation, your truth, and you’re giving that to the world. I can’t even explain that feeling. So in 2017, I’ll still be doing television, film and modeling. But First Ave Eyewear is like Marley, my daughter, it’s my new baby. It’s my ability to walk into a new year differently than I walked in last year. Last year, I was trying to be somebody else’s client, trying to catch somebody else’s check, trying to pose in somebody else’s product. Now I’m looking for somebody to pose in my product. It’s amazing. So 2017 is my year of liberation. 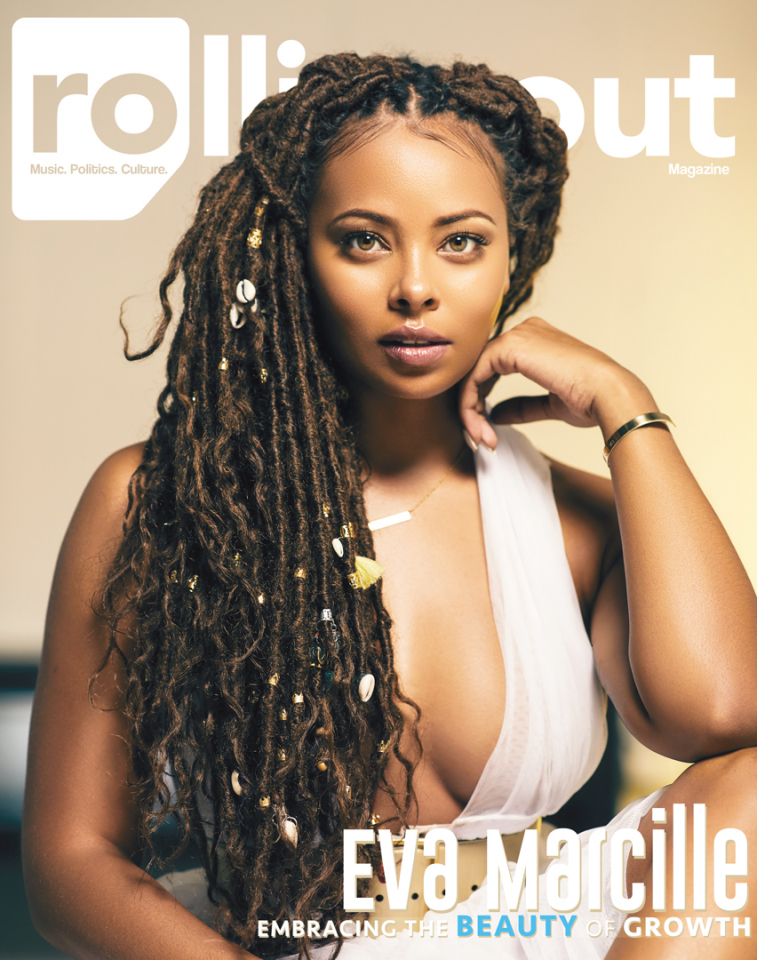 Janet Jackson describes the exotic pets she had as a child

Malika Haqq is ready to co-parent her son with O.T. Genasis