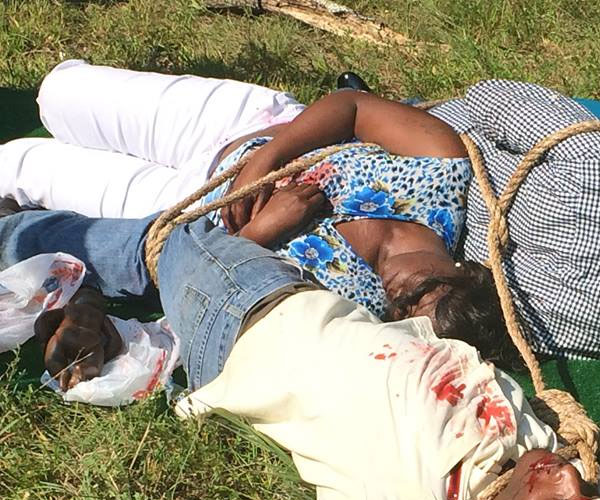 There are many counties and towns in Georgia that bear the name of former slave masters and hold horrific secrets. One such town is Monroe, Georgia, located in Walton County, only 60 miles from downtown Atlanta. This tiny town with a population of around 14K received national attention for the lynchings of two black couples in 1946. The case is unsolved; however, the memory of that terrible night is a lesson in how the KKK operates and the power of the Confederate flag. For the past 13 years, Georgia State Rep. Tyrone Brookes has led a movement and tribute to bring attention to the murders of Roger Malcolm, his 7-months pregnant wife Dorothy Malcom and their friends, George W. Dorsey and his wife Mae Murray Dorsey in 1946. Because of his activity with the Moore’s Ford lynching case, Brooks maintains his recent incarceration was partly to blame. His investigation and work prove that prominent Georgia officials including former Gov. Herman Tallmadge played a direct role in the victim’s death. Brooks was defended by former Gov. Roy Barnes at his corruption trial and according to Brooks Barnes was deeply concerned that his work on the last mass lynching in America goes forward.

Racial tension was high across the state of Georgia as Blacks were now able to vote in Georgia’s all-White primary. In 1946, a ruling by the U.S. Supreme court known as King v. Chapman declared the White primary to be unconstitutional, allowing Blacks to vote in the state of Georgia. Racists were enraged, none more than the powerful US Senator Richard Russell, who declared that “It is a manifold evil” to allow Blacks to vote and some say he sanctioned the attack to instill fear among Blacks who would try to vote. George Dorsey was a WWII veteran and had served five years in the Army fighting the Japanese in the Philippines. He returned to Monroe and worked as a sharecropper and he was determined to vote. He defiantly voted amid the threats of violence by the KKK and was told he was going to pay for that decision.

Roger Malcom was looking forward to starting his family since learning that his wife was pregnant. However, rumors soon swirled that Malcom was not the father of the child and that Dorthy Malcom was forced to have sex with a White man named Barnette Hester while Malcom was working in the fields; the Hester family was large and owned so much land that their property was known as “Hestertown.” When Roger Malcom discovered this was enraged and confronted Hester on his property on July 11, 1946. A fight soon broke out and Malcom stabbed Hester, it was then that other Hester family members seized Malcom with the intent to kill him on the spot. However, a female member of the Hester family begged her relatives not to kill Malcom on the property. A sheriff’s deputy was summoned and Roger Malcom was taken to jail and held on $600 bail, a large amount of money for anyone in 1946. Hester was hospitalized for his injuries and swore vengeance on Malcom for the fight.

On July 25, 1946, J. Loy Harrison drove Dorthy Malcom and the Dorseys to the jail and personally bailed out Roger Malcom. It was late in the afternoon, around 5:30 p.m. On the way back to the farm, Harrison’s car was stopped by a group of 15-20 armed White men on Moore’s Ford Bridge between Walton and Oconee County. The two Black couples shook with fear as it became apparent what was going to happen next. According to Harrison,”A big man who was dressed mighty proud in a double-breasted brown suit was giving the orders. He pointed to Roger Malcolm and said, ‘We want that n—–.’ Then he pointed to George Dorsey, my n—–, and said, ‘We want you, too, Charlie.’ I said, ‘His name ain’t Charlie, he’s George.’ Someone said, ‘Keep your damned big mouth shut. This ain’t your party.’”

Roger Malcom and George Dorsey were dragged from the car with their wives pleading for mercy. When one of the women recognized a member of the lynching party and pleaded with him for mercy, both women were also dragged from the car. The women were tied to an oak tree beside their husbands and the mob fired three times at point blank range, hitting their victims 60 times. The crowd then cut open the stomach of Dorthy Malcom and removed the fetus.

According to Rep. Brooks, “A Confederate flag was flown at the crime scene next to a Walton County Sheriff’s squad car. This was to show people that this was a Ku Klux Klan killing and law enforcement was involved.” The murders shocked the country and then-President Harry S. Truman created the President’s Commission on Civil Rights and ordered the FBI to investigate. Grand jury testimony was heard and witnesses called to testify, and members of the lynch mob were known by name. However, the grand jury was “unable to establish the identity of any persons guilty of violating the civil rights statute of the United States.” The slaughter of the Malcoms and Dorseys was the last mass lynching in America and the case remains unsolved and open.