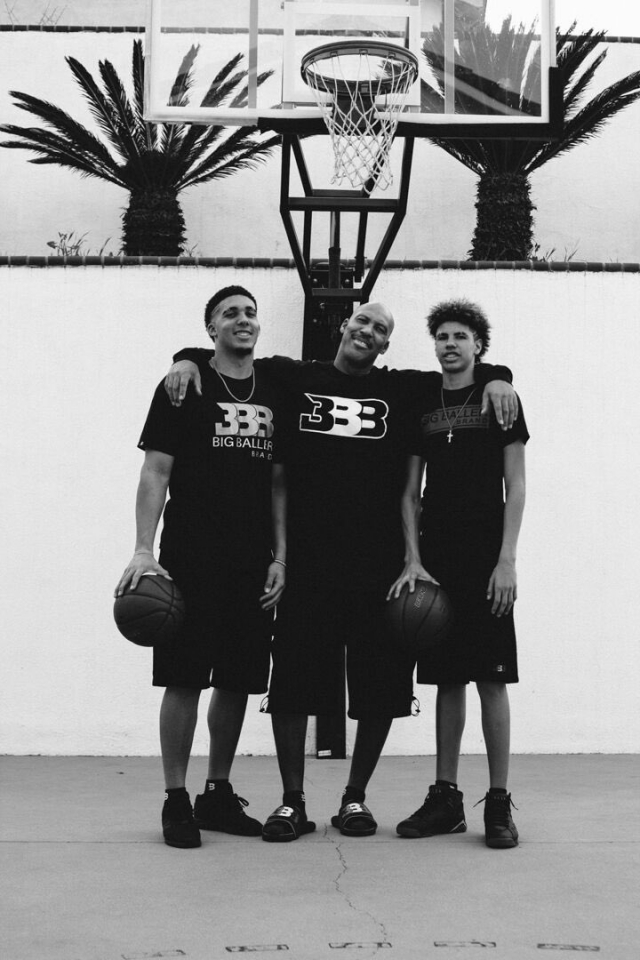 (Photo from @bigballerbrand/ Twitter) (From left to right) LiAngelo Ball, LaVar Ball and LaMelo Ball pose for a photo.

The AAU culture in basketball has pushed parents around the country and even around the world to proclaim their children as the greatest thing to ever play the game. Kids are now ranked in middle school in national publications and have professional YouTube mixes and stories done on them before the age of 14 because everyone wants the scoop on the “Next Big Thing.” Focus on scoring more points than the other team instead of playing a non-full court press defense is taught at an early age as the recipe for victory. Flash has become valued over fundamentals in order to build a buzz in the basketball community.

With that vent on the general state of youth basketball right now, the Ball brothers are great for the game. UCLA freshman guard and 2017 projected top-five NBA pick Lonzo Ball, Chino Hills High School senior and UCLA-commit forward LiAngelo Ball, and Chino Hills sophomore and UCLA-commit LaMelo Ball are all standout basketball players in their own right. LiAngelo scored 60 points in a game this season a few weeks before his little brother LaMelo nearly crashed the internet by dropping 92 points. As one could imagine, the Ball household is usually filled with competition, a lot of workouts and forcing one another to get better. These workouts and shootarounds are coordinated by their father, LaVar Ball. He’s the reason after only less than five minutes of opening family gifts during the holidays, the trio of brothers are alternating sets of pull ups and push ups instead of watching the Knicks or Cavaliers game on TV.

LaVar made headlines for making comments like thinking LaMelo would easily pass 92 points again sometime in his career, Lonzo would only play for the Los Angeles Lakers or the fact that he thinks that Lonzo is a better player than two-time defending NBA MVP Stephen Curry. Charles Barkley‘s response to LaVar’s chain of headlined stories offered him some parenting advice.

“Your son’s life is his life,” Barkley said in a video posted by Ball Street Journal. “It’s not yours. No matter what his son accomplishes, it’s not yours. It’s his. So I wish his son nothing but the best, the kid’s a hell of a player, but I don’t like when parents interject. It’s not your life.”

LaVar responded by explaining his methods on “Undisputed.”

“I have the utmost confidence in what my son does. Just because I said he’s better than somebody, who cares? I believe it. So I don’t care what anybody else says,” LaVar said. “It’s just that, I know what work my boy puts in for me to say that. I’m not disliking Steph Curry or anything. What he’s done, that’s for him, but I know what my boys are all about and like I said, Lonzo was the best player in high school. He was the best player in college. You think he’s gonna get to the pros and be like, ‘I made it to the pros, now I can be average?’ We coming for everybody.”

LaVar also said that he doesn’t think that he’s added pressure onto any of his sons because he doesn’t think pressure exists in sports. He said he thinks that pressure comes in real-life threatening situations. You can only respect a man that believes in his sons with that much confidence. He trained the trio hard every day, saw the results and sees the progression continuing in the future because of the work ethic he instilled in each and every one of them from an early age. That’s why LaVar Ball should be saluted and not slandered.