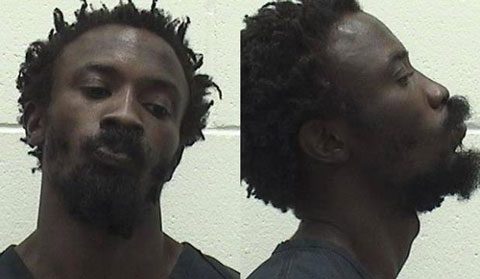 It has become apparent that pork chops should not be served around Terry Bernard Ball Jr., 29, of Athens, Georgia.

Back on Feb. 29,2017, a pork chop was used by Ball against his mother in an assault. According to his 60-year-old mother, Ball became upset after she served him dinner because she didn’t buy him any cigarettes. In a fit of rage, Ball threw the pork chop at his mother, pushed her and then head-butted her. His elderly father jumped on his son and held him down until police arrived. Officers kept a Taser trained on Ball as his father got off of him and he could be placed in handcuffs, according to a police report.

For that incident, Ball was arrested for simple battery and a probation violation. He was released on a $3K bond and was ordered to have no contact with his mother and stay away from her home.

Last Wednesday, Ball violated those conditions and visited his mother’s home during dinnertime. There were other people gathered in the home and Ball became upset once again over a pork chop. His mother called 911 and told the operator that her son was trying to fight everyone in the room. Police arrived and arrested Ball. According to the police report, the reason for the fight was “they ate his pork chop and now he has to eat noodles.”

Ball is now in the Athens-Clarke County Jail charged with violating a family violence order.

Unfortunately, food has been a source of extreme violence in other families. In 2014, Ethel Jean Banks, 61, came home and was hoping to eat her leftover ribs. However, when she began looking for the ribs, she discovered that they had already been eaten. Banks confronted her brother and the two began arguing. Her brother admitted to eating the ribs and their argument soon became physical. When she regained her balance, Banks stormed into the kitchen and grabbed a butcher knife. She lunged at her brother and reportedly told him, “I’m going to kill you!” She was eventually arrested and charged with aggravated assault for family violence.