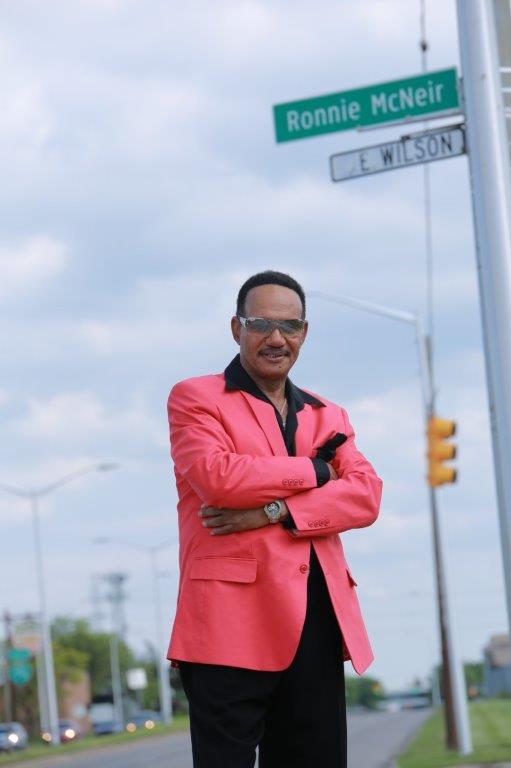 Ronnie McNeir, of the legendary Motown recording group The Four Tops, was recently honored in a street renaming ceremony by the city of Pontiac, MI. The street E. Wilson Street was officially renamed to Ronnie McNeir Street in front of many political leaders and the current mayor of Pontiac, the Honorable Deidra Waterman, as well as the former Mayor of Pontiac, Mr. Walter Moore. McNeir grew up on E. Wilson Street which is located at the corner of Woodward Avenue, near the new M1 Concourse Race Track.

McNeir was honored for his musical legacy and contributions he made to the community. He is a self-taught gifted pianist, songwriter, producer and versatile tenor, and has over 30 years in the music industry. He’s worked with the who’s who of soul music of his time, including Bobby Womack, David Ruffin, Smokey Robinson, Teena Marie, Angela Winbush, The Whispers and Eddie Kendricks. He also served as the Four Tops musical director for several years and ultimately joined the group as a singer in 1999.

Affectionately known by the group as “Ronnie Mac from Pontiac”, McNeir dedicated a single named “Pontiac” on his last CD “Living My Life,” of which his fans created and performed a familiar dance craze(also known as a “hustle” dance) just for his song. When asked how he felt about the honor, McNeir said he’s truly grateful for this recognition and never dreamed that learning to play the piano at such an early age would take him this far. His musical legacy is an inspiration to many people, including young and old.