Karrueche Tran is definitely in her zone. You know that place we find when we reach that level of unbothered that allows us to flourish? Mama, she made it.

The trolls can come for her. The gossip sites can attempt to define her by her dating life. But she is focused on feeding her soul and crafting a path of her own. And when I talked to her by phone on a Saturday afternoon, it was a rare day off. She was relaxing in her Los Angeles apartment for a quick weekend just after shooting and just before a promo frenzy for her upcoming TNT series, “Claws.”

Premiering June 11, the show stars Niecy Nash as Desna and Tran as Virginia at the center of a nail shop manipulated into a money laundering front for a Palmetto kingpin. It’s “Breaking Bad” meets “Living Single.” Desna owns the salon. Her three besties work with her. And then there’s Virginia. She is the new girl, the young girl, the round-the-way ratchet girl they all love to hate –– for now.

Tran gives Virginia life, honey. And it wasn’t easy. Yeah, she has the Emmy Award-winning web series “The Bay” under her belt and a co-starring role in “A Weekend With the Family” on Netflix, but she says “Claws” was a different kind of challenge. 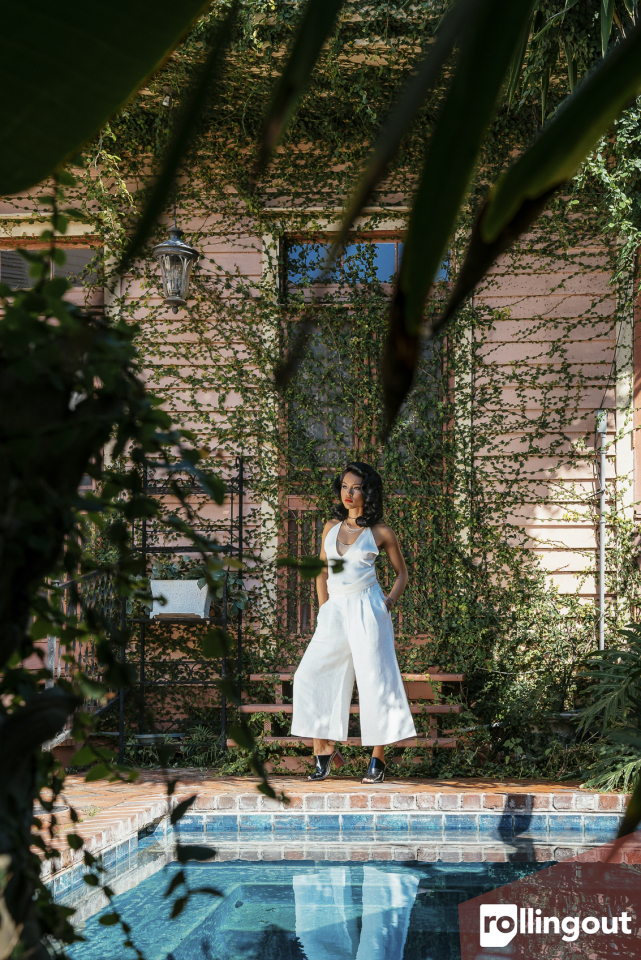 “I have had plenty of auditions that I have been on and gotten call backs but they go with someone else,” she admits. “I usually self-tape but for some reason, I wanted to go in for this role. I went in there, auditioned, showed my talent and did what I needed to do. It wasn’t given to me. It wasn’t a favor. And it’s an amazing feeling that shows I am on the right path.”

“In real life, I am more emotionally unemotional,” she says in a moment of vulnerability. “I have a lot of emotions and things I have been through but I don’t show them. I keep a lot of stuff bottled up, so I feel like acting –– in a sense –– is like therapy. It’s a way for me to release these emotions that I felt. And I love it. Acting is not easy at all. There are people who have been doing this for years and years and years. I am just getting started and building my way up.”

As much as she loves her prior roles, Tran feels Virginia is that character she can explore. She’s not the girlfriend. She’s not the cutie next door. She’s a complicated, crazy kind of chick with hurt in her eyes. Much like Halle Berry once used her comedic talents early in her career as Nisi in B.A.P.S. to pave the way to blockbusters like X-Men and Die Another Day, Tran says she’s aiming for a similar track.

“I got to work on myself through a role like Virginia,” she says. “I can create and be fun and she’s a hot mess and extra, like you said. And I have this crazy wild side within me, so I get to let that side out –– that ratchet side. Being a part of this project is huge for me. I am so happy.”

That joy is beaming through her. She’s slaying the red carpets in everything from Fendi to Asilio. But it’s not about the brands or her beauty. There’s a lightness about her. She’s laughing and living out loud.

By now, we’ve all seen the hilarious videos of Tran and Nash. Between takes, the two have given us life with their frenemy spoof on Snapchat and the ‘gram.

“With Niecy, it’s authentic, whether on set or off. We are having fun. Niecy has been like a mother, a sister, a best friend. If I need help delivering a line or I’m confused, I can get her help. If we want to talk about boys or get drinks, we do that. I love it and we have so much fun together,” she says. 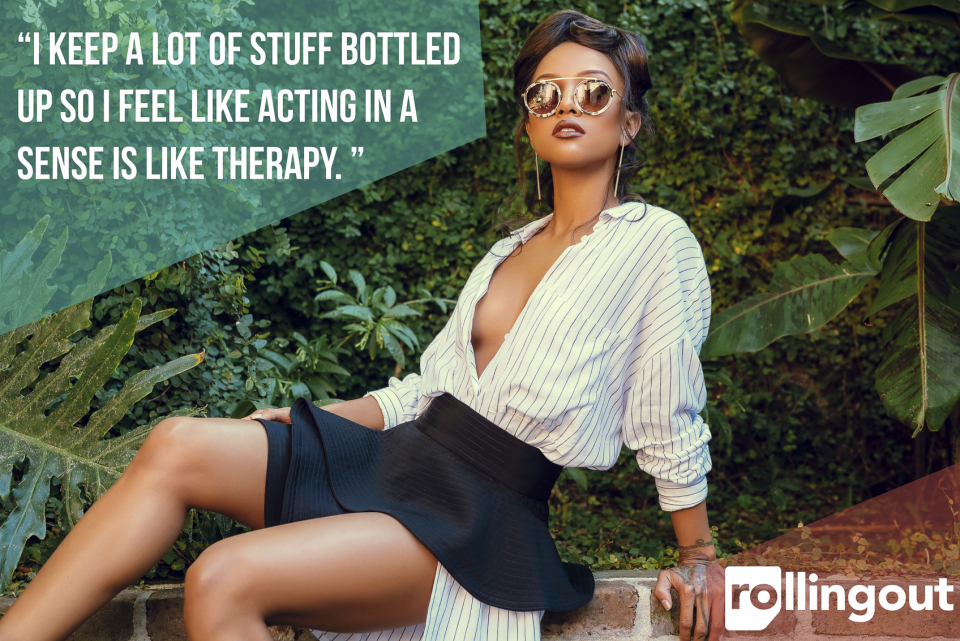 Nurturing friendships is part of Tran’s self-care rubric. Whether it’s celeb BFF Christina Milian or a childhood bestie, she believes in real friends.

“I have friends that I have had since middle school, which is great because you have all of these years of growing together and going through things,” she shares. “Even with Christina, we recently became best friends over the past four or five years but the way we bonded is we are two girls who identify with one another; we’ve been through the same situations and we like to have fun. I respect that and I care about that, especially in this industry where there is so much phoniness out there. I cherish having genuine friendships.”

Another Tran key to maintaining peace: giving back. Be it shoe donations, AidsWalk, Smile Train or donating turkeys, she finds ways to help others.

She reveals, “For me, philanthropy and volunteer work is something I have always done even before whatever you want to call this fame stuff. I look at my life and I feel like I am blessed to be in this place and afford this and that and take care of my family. It’s important to support your community even if you don’t have money. You can volunteer your time. Having the spirit of giving back to someone who is not as privileged as you forges healing.

“I don’t know if I would be where I am without giving back. I’m trying to promote positivity and love in this day and age, especially with social media. People forget it’s OK to be kind to one anther. People find the negative in anything. It’s okay to smile, to have a conversation –– it’s the little things the things money can’t buy. I think people forget that love is a universal feeling. It’s not just love between partners, but love within your body. Whether you are walking down the street or going to work or hanging with friends, it’s exuding that air and kind embrace. That’s free. You don’t have to pay for it. You just have to be willing.” 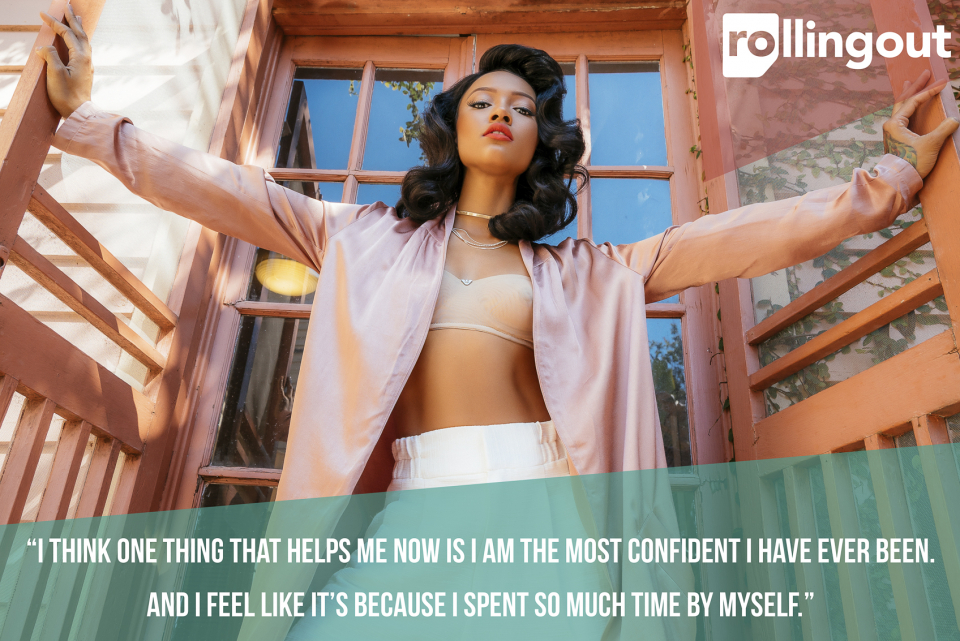 Given the way her social media comments sections are regularly filled with sexist, hateful and debasing words and she’s been dragged in and out of headlines for going through what most women go through in life and love, it’s refreshing that she stays so optimistic.

Her family helped plant those seeds of positive thinking. Tran, who is Black and Vietnamese, didn’t suffer the insults her character Virginia endures on “Claws.” But she had her fair adolescent share of finding her space.

Despite her father being in and out of her life, she says he was and is very nurturing.

“He’s very loving,” she says. “Even if I didn’t have the best grades, he was still very encouraging and filling me with love and positivity. My mom’s the same way. She would give me anything, the shirt off her back if she had to. That’s where my nurturing side comes from. And my godmom also helped raise me. She set a standard within me. At the time I didn’t realize it because there was a lot of things I couldn’t do, but she was disciplining me to do the right thing and grow into a young lady. My family definitely played an important part in shaping me.”

But like all of us, sometimes family support can only carry us so far. There’s always work we have to do ourselves. For Tran, it’s all been a journey of rising above the drama and embracing self.

She says, “It’s tough because I have been ripped apart and dragged 10 times across this world with things. Where do people get this stuff from? It makes me realize you can’t allow someone’s opinion to alter your mood or change who you are. Anybody can say anything about you whether it’s true or false and it’s really tough being on social media. But you have to look at the bigger picture and focus on you. If Joe Shmo says, ‘She is a b—-,’ so what? That’s how he feels. You can’t fight all these battles with everyone. For what? Most of these people that talk mess just want a reaction. They want to be responded to with pettiness, which is why I pump positivity into people.”

Wise words from a woman who just celebrated her 29th birthday. Tran says confidence is what she’s carrying into her new year.

“I think one thing that that helps me now is I am the most confident I have ever been. And I feel like it’s because I spent so much time by myself. I believe everyone finds their own way,” she says.

Tran’s new attitude has led her to hold herself accountable. She sets goals for herself and it comes down to small everyday actions. On her list, she says, are things like looking people in the eye when you’re having a conversation, listening closely to the person sitting across from you talking to you and listening to yourself –– not the critic in your head.

“Anyone out there dealing with low-self esteem, you have to learn to love yourself. You have to look at yourself in the mirror and learn to take care of yourself and make you happy,” she advises. “Whatever situation you go through, as hard and as tough and dark as it may seem, there is a light at the end of the tunnel somewhere down there. Be patient. Be confident. Have faith. Everyone wants a now resolution but it takes time to get over things.”

It’s safe to say Karrueche Tran’s clawed her way over the hump. It’s time to shine, no tea or shade. 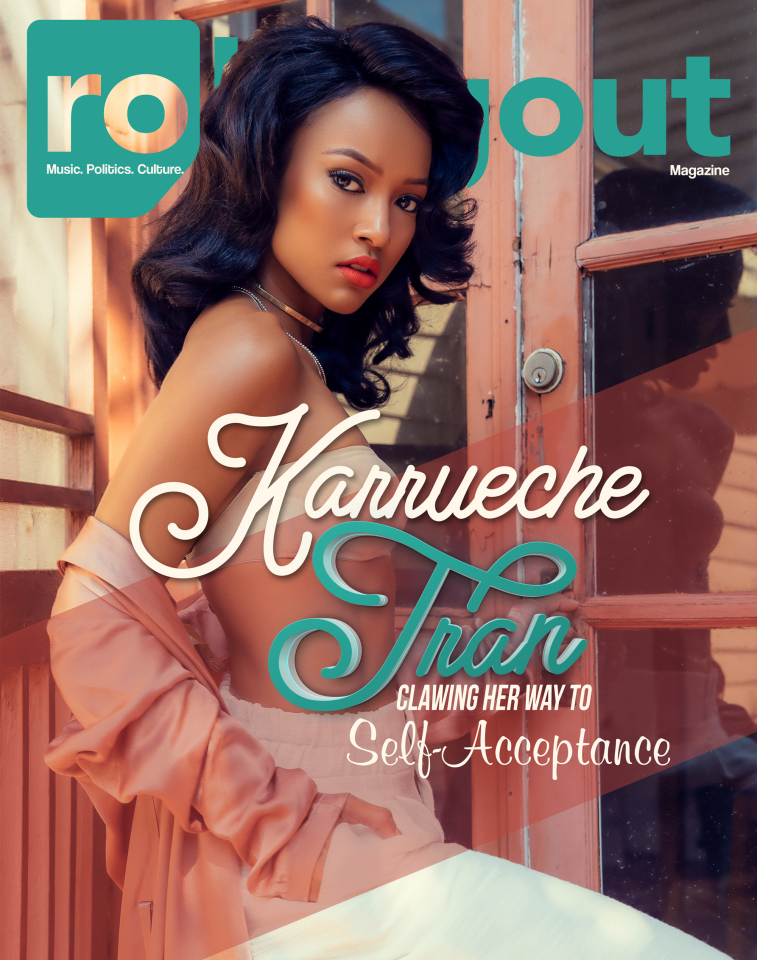 Favorite song right now: “Love Galore” by SZA and Travis Scott
Last book read: Broken Flowers: And Other Stairways to Heaven by Robert M. Drake
Must see movie: It
Favorite thing to cook: Enchiladas, truffle mac and cheese
Next goal: A big movie like Columbiana or The Fast and the Furious.
To your 20-year-old self: “Stay in school. I was in community college for graphic design. I want to go back.”