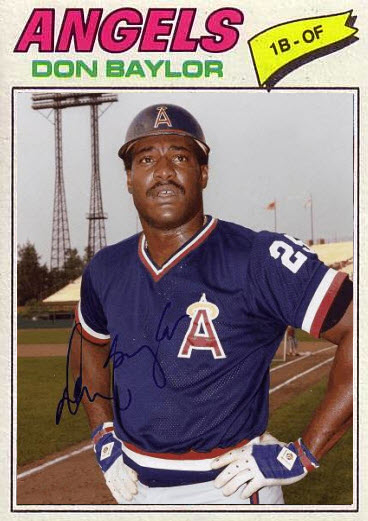 Major League Baseball legend Don Baylor, one of the few people in history to ever win both the Player of the Year (MVP) and Manager of the Year awards, has died after a courageous battle with cancer. He was 68 years old.

Don Baylor, a former Yankee who won the American League MVP with the California Angels in 1979.

“Don passed from this earth with the same fierce dignity with which he played the game and lived his life,” his wife, Rebecca, said in a statement, according to ESPN.

Baylor played in 19 major-league seasons with the Angels, Orioles, Yankees, Red Sox, A’s and Twins. He made the All-Star team during his MVP season with the Angels, leading the league in RBIs and runs.

Baylor signed with the Yankees before the 1983 season, and won his first of three Silver Slugger awards as a designated hitter that year. After three seasons in New York, he was traded to the Red Sox a week before the 1986 season.

Baylor appeared in three straight World Series with the Red Sox, Twins and A’s, winning the title with Minnesota in 1987. In addition to DH, Baylor played in the outfield and at first base throughout his career, which ended in 1988.

Baylor returned in the dugout as manager for the Rockies from their inaugural 1993 season until 1998, earning NL Manager of the Year honors in 1995. He worked as Cubs skipper from 2000-02 and served as bench coach for the Mets from 2003-04.

Baylor starred in baseball at a time where the African American presence was conspicuously diminishing in the National Pastime, going from a high of 33 percent in the early 1970’s to single-digit percentage in the new millennium.

He is survived by his wife, son Don Jr. and two granddaughters.