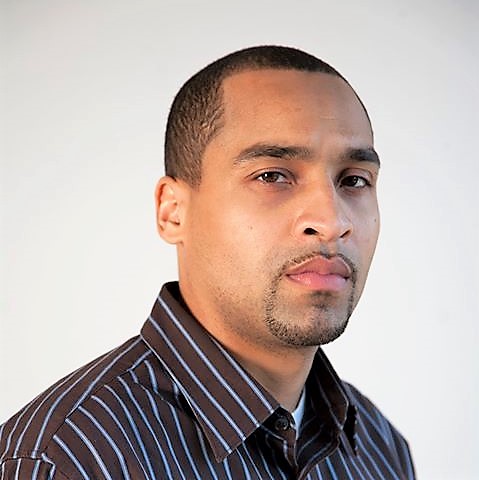 Anton Deshawn’s debut film, Call Center, is a hilarious comedy. that looks at many things–including the human psyche. Furniture call center supervisor Marcus Jones is up for a promotion as manager. After the position is given to someone else, we watch as a mystery unfolds and chaos soon ensues. Screening at Black Harvest Film Festival, this one is sure to keep you thinking about what your real passion is — for life and professionally.

Tell me about the screen play and how it evolved?
My original idea for Call Center was to make it a TV sitcom or web series, but the more characters I created, along with the workplace scenarios, it was quickly decided that I should make it a film. I believe by my 3rd or 4th draft, my producer Christopher Bailey introduced me to playwright and actor, Kevin Douglas. Shortly after meeting Kevin, he was hired as my co-worker and helped me tighten up some things with the script.

The actors were exceptional.  Were they professionals or was this their first time in front of a camera?
For the most part, my entire cast had years of experience in front of the camera.  The team of producers and I made it a point before we started casting to really attach some veteran actors who can show some depth onscreen. My casting director, Tamara Sibley was fully on board with that visual and was able to give me what I was looking for.

I found the film had a moral theme. Do you think audiences will find this to be so and are there several morals to the film?
I hope so. I believe the lead character, Marcus Jones, comes to a crossroads in the film where he must decide if he’s going sacrifice his own job to save his fellow employee’s jobs.

Tell me about your directing experience and what drew you to this project?
I’ve done four short films, which I would say were all good learning experiences. Call Center is my feature film debut and what inspired me was that I previously worked in the call center industry for over 10 years. I’ve been a customer service rep to a supervisor to a manager, so I’ve seen it all from different perspectives.

What you think it is that makes Chicago such a great location?
Chicago is a great location to shoot any film. There’s so much to find and discover when you’re in Chicago or the Chicagoland area. This film brought things full circle for me. Given that I was originally born in Joliet, Illinois, and we had the opportunity to film the character Simone’s office scenes there, plus the call center itself was in Romeoville, Illinois, which is right outside Joliet.  The restaurant (May St Café) and bar (Buffalo Wings & Rings) were located in Chicago. The car scene in the beginning of the movie was shot by my old apartment on 61st and Ingleside when I first started writing Call Center. Basically filming in and around Chicago … I wouldn’t trade it for the world.

What advice do you give up-and-coming directors of color?
There’s strength in numbers, which means form a team with a group of film makers. If you’re a director, the team needs to at least consist of a producer, writer, editor and hopefully a cinematographer. That’s how Call Center got off the ground. My fellow business partner and executive producer of Call Center, Rahim Branch, called a meeting with a group of friends who were filmmakers and the group consisted of the job titles I listed earlier. After one round of everyone pitching stories and scripts, it was decided that Call Center should move into pre-production. Again, form a team. Let the members of your team challenge you. It’s going to make you and your work even better.

Call Center runs Aug. 11 and 15 at the Gene Siskel Film Center of the School of the Art Institute of Chicago, 164 N. State St. For more information, visit http://www.siskelfilmcenter.org.