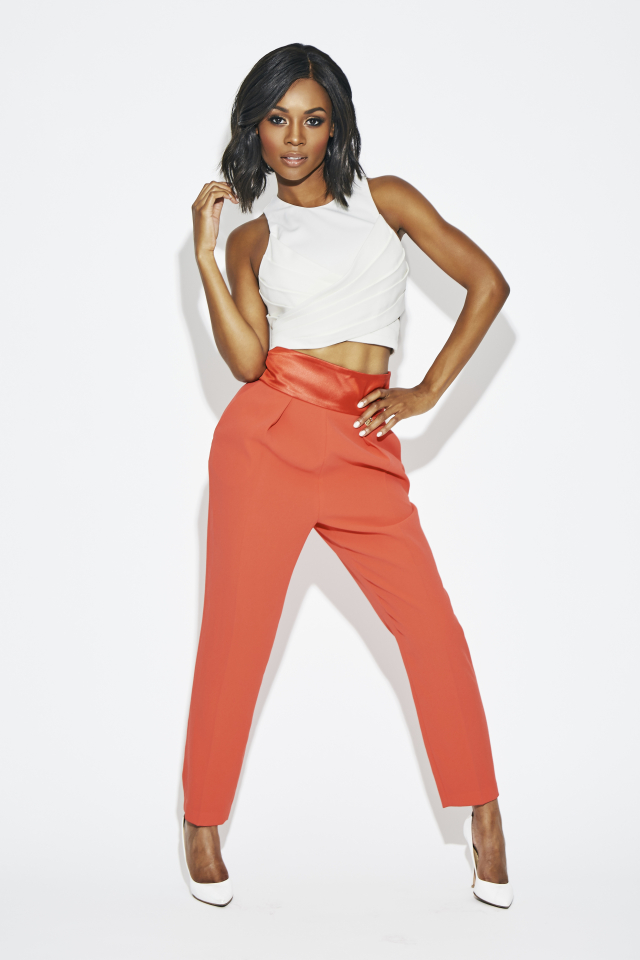 Whether it’s winning an Emmy for her journalistic work, hosting the hottest events, looking chic while corresponding on one of the top gigs for entertainment news, or being a role model for girls with big dreams, Zuri Hall is creating her own lane and inspiring others along the way. This Ohio State graduate took her love for storytelling to local television stations in Ohio and Texas before chasing her dreams in the Big Apple. With determination in one hand and deadlines in the other, Hall hit the ground running by doing various gigs on Fuse TV’s music countdown show, “Trending 10,” MTV’s after hours shows, and BET’s “106 & Park” before landing the ultimate dream job with “E! News” where you can catch her every evening dishing the latest in pop culture, interviewing big names like Simone Biles, going live on the red carpet, or using her platform to speak out about recent world events. With much success at such a young age, Zuri’s work ethic, electric style, and inviting energy is inspiring fellow millennials to get up and go get it. Hall shares with rolling out  her journey and drops gems on investing in yourself.

The Zuri Hall we get to see on TV is vibrant, intriguing, and a girl’s girl! What was the journey like from being a young woman with dreams to now a popular on-air personality?
I was about to graduate from Ohio State, and stumbled upon a posting for an audition for a local TV station in Indianapolis… so I ended up driving from Columbus to Indianapolis in my little car. There were hundred other people that auditioned for the role, but I ended winning the competition and being the face of this TV station for a year. It was a paid gig so it was my first job out of college… it was really Baptism by fire from there.  I learned to shoot, edit, and produce. The experience made me realize that this is something I could really make a career out of. Every day was different so the momentum just built from there!

People tend to only hear about the glamorous part of career-success. What were some challenges you faced when trying to land a job in your field?
The challenge was being the underdog. I felt that way through most of my career. You’re trying to break into such a competitive field where there are so many people who are already so accomplished … so the hardest part was just convincing people that I was worth the risk, a shot that they should take. That’s why I am forever grateful for every network and every channel that place their bets on me, because in the beginning, you have to get your feet wet. Now, it’s kind of cool that people can create that work! There are more cameras and platforms for self-upload. People weren’t doing that when I got started. For me, a lot of times it was about proving myself and that meant working for free or less than I felt I should be working initially. Though that was sometimes the case, I received the experience.

Aside from your day job, you have two popular outlets that connect you to fans: A YouTube channel titled HeyZuriHall, which has more than 6.5 million views and 100,000+  subscribers and counting, along with a lifestyle blog titled #AlphaBabe. How does social media play a factor in expanding your brand?
Social media plays a big part in expanding my brand because ultimately I can be my complete self on these platforms because I’m in complete control of the final product. Working for a network it’s a lot of fun and you get to represent the brand, but a lot of times someone else will be editing it. The cool thing about working at E, I’ve had a hand in that. So, a lot of the times I may produce a package that I’ve written and also have been the on-air talent in. With my YouTube channel, it’s great because no matter what I put out there it’s my brand, it’s my child, from my mind and from my heart. It’s important because when you think about what your brand is and what you want to represent: you want to be in control of that message. Your personal social platforms are a great way to stay in control of your message.

Getting a call back is just half the win when it comes to landing your dream job. What are three tips you can give millennials about nailing the interview?

What’s your favorite thing about your career?
Every day is different. It’s nice to know that this Monday isn’t going to look like the next Monday or the Monday after that. Also, I honestly love my co-workers. It’s really nice to walk into an office or a newsroom and really enjoy the company of the people you’re with, and that’s a blessing because that doesn’t happen everywhere you go and I appreciate that now more than ever in my career.

What are three big “Don’ts” you can give a millennial when it comes to starting out in their career?

What is some needed advice you can give a young girl right now that feels like giving up on following her dreams?
Every now and then you will face the challenge of giving up… because a work day isn’t going your way; or people are mean or reject you; or maybe you feel like you’ve worked very hard and your end goal is still nowhere in sight. But remember, there is usually a way to make your truest dreams become a reality. You have to want it more, be more patient, and outwork your competition… but true talent grouped with persistence and dedication to your craft will eventually make room for your breakthrough. Success is not a straight and simple path, so be open to the winding road of life. There is more than one route to the same destination. Keep an open mind. Look at detours or setbacks as alternate routes that will somehow prepare you for the place you are meant to eventually arrive.