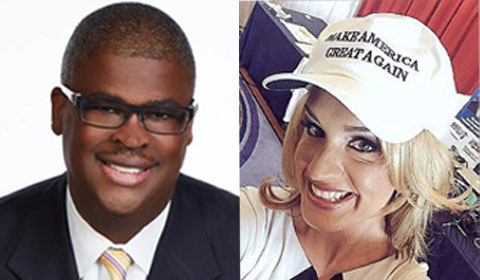 There’s news of another sexual assault claim at Fox News. This time, host Charles Payne, 56, is the target of accusations by a co-worker. Payne is the host of the Fox News segment “Making Money” and has been accused of a sexual assault that dates back to 2013 by regular Fox News contributor Scottie Nell Hughes, 37, according to media outlet Daily Mail.

Hughes claims in court documents filed on Monday in New York that in July 2013 Payne sexually assaulted her in a hotel room. She claims that Payne pestered her for her room number and she finally gave it to him. When Payne arrived, she claims he said, “You know you want this…You’ve been teasing me since that first time on set, wearing those short dresses over those long legs with your big boobs hanging out.” According to Hughes, he then raped her in the hotel room.

Instead or reporting the rape immediately, Hughes engaged in a 2-year affair with Payne, though both are married. Payne made promises to mentor Hughes in her career at Fox News and eventually get her a job as a contributing guest, which pays for appearances. But things did not go as quickly as Hughes planned and when she attempted to end the relationship with Payne, she claims he would at times get violent and she feared for her job.

Payne has denied any charges of sexual harassment and stated through his lawyer Jonathan Halpern of Foley & Lardner LLP that he “vehemently denies any wrongdoing and will defend himself vigorously against this baseless complaint. We are confident that when the evidence is presented in this case, Mr. Payne will be fully vindicated and these outrageous accusations against him will be confirmed as completely false.” Payne was suspended and reinstated after evidence showed he and Hughes had a consensual affair.

Hughes claims that in retaliation for bringing the charges against Payne, personal email correspondence was released by someone at Fox. These emails show what seems to be a consensual sexual relationship between the two.

On June 6, Red Alert Politics posted one such email that reads, “Do you know what I keep dreaming about… You and I in the pool… My legs wrapped around your waste [sic] and you have me pressed up against the wall of the pool. Skin glistening and smelling of coconut…You thrusting yourself deeper inside with each push… And your fingers grasping each of my cheeks. Holding me to you.”

Hughes is alleging gender-motivated violence, gender discrimination, retaliation and defamation and names Payne, Fox News and 21st Century Fox, among others, as defendants.