T.I. and Tiny divorce back on?

Fans of rap royalty T.I. and Tiny were more than loosely interested in their marriage’s well-being. It became sort of an obsession among their vast fan base that they stayed together, especially those who faithfully followed their highly-rated reality show, “T.I. & Tiny: The Family Hustle.”

Fans were feeling some kind of way when, after months of fighting and frustration, Tameka “Tiny” Harris filed for divorce as the reality show wound down to its conclusion. Blame began to be volleyed back and forth between the two fan bases like a tennis match. Clifford “Tip” Harris took some grief after he allegedly bedded Tiny’s assistant behind her back, and Tiny was the recipient of some hate from his fans that she didn’t do enough to keep the large clan together.

It was hoped that time away from the TV cameras would give them enough of a reprieve from the spotlight to reconcile. And, for a while, it appeared that it was working and that they hit the brakes on their divorce proceedings.

Unfortunately, the process to end their marriage is back in gear. According to  bossip.com, new court documents have been filed on behalf of the music power couple. Instead of a dismissal, T.I. and Tiny both agreed to have the court extend the time they have to hash out their divorce, according to court records obtained by the gossip site. Their Nov. 8 consent order gives the couple an extension in order to continue their case and possibly agree on support, property, debts and custody.

According to the entertainment publication, the couple who were once inseparable can no longer be found in the same vicinity in recent months. Tiny was a no-show at T.I.’s birthday bash in South Beach in September, while T.I has not been seen at any of Xscape’s concerts, clear indications that there’s friction in the household. Moreover, neither has mentioned the other on social media in a while and something is clearly amiss.

Tiny Harris’ filing requested her estranged husband make a full accounting of their money, property and investment accounts because she said she is entitled to half of everything. She also wants half the automobiles they amassed and some of the stacks that Tip had put away in a retirement account.

However, Tiny stated that because they are in debt due to the millions they owe the IRS because of T.I.’s high earning ability, he should be responsible for paying it off, bossip.com reported.

T.I. countersued his wife for an undisclosed amount and terms. Details were not available because he asked the judge to seal the divorce record.

Neither T.I.’s nor Tiny’s attorneys were available for comment at press time. 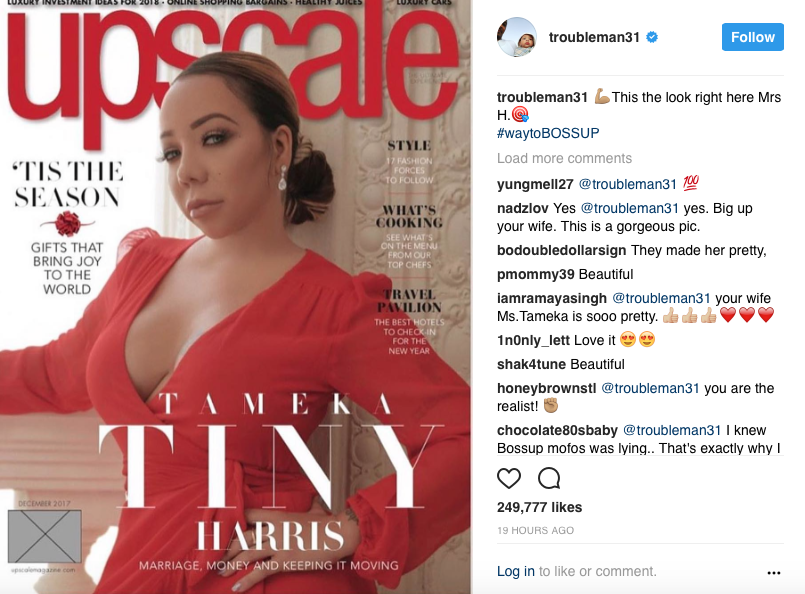