Nola Darling is still in control of her life and sexual freedom. And now a whole new generation can get to know this empowered woman who refuses to tolerate being labled or controlled.

Spike Lee has adapated his1986 movie, She’s Gotta Have It for Netflix but this time with a lighter approach.

The first episode introduces the free-spirited Brooklyn artist Nola Darling (DeWanda Wise) and her three lovers: Jamie Overstreet ( (Lyriq Bent), the strait-laced exec who writes poetry for her and wants her to be “his”; Greer Childs (Cleo Anthony), the narcissistic pretty boy who thinks Nola’s a sex addict; and goofy B-boy (is that still a “thing”) Mars Blackmon (Anthony Ramos), who makes her laugh and is saving his pennies so he can buy the brownstone she rents so she won’t have to pay rent anymore.

All of the actors are believable if not likable and the series makes a star out of Brooklyn. Beautifully shot as always with A Spike Lee Joint, you’ll want to buy a brownstone and follow your artistic dreams.

Sadly, three decades removed from the original film, women with healthy sexual appetites are still labeled freaks and sex addicts. Women are stil cat-called and harrassed on the street. It is still dangerous to walk the street alone after dark, as is shown in one harrowing scene in the series. But bravo to Nola Darling for refusing to be cowed by other peope’s opinions and for making decisions based on what works for her life.

Nola’s three lovers: Jamie Overstreet, Greer Childs and Mars Blackmon (Anthony Ramos) all play a part in her happiness, needs and desires. Each man provides something different, but she simply is not satisfied with just one of them. Before her moment of truth, she continues her love affair while all three men remain in the dark. Nola has a choice to continue her secret or display the truth. When the truth comes to light, the reactions are priceless but not predictable. 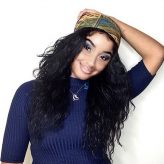 Catch me in front and behind the camera. I'm a writer, producer, media personality, and creative soul.