Mo’Nique’s sister blasts her behavior, tells her to check on dying mom

Normally, celebrities who are being pelted and pummeled with hatred from the outside world are able to bunker themselves within a comforting refuge that is a close-knit family. This is not the case with comedian Mo’Nique.

The Academy Award-winning comedian has to feel isolated on an island because her sister has come out to blast her older sister’s recent behavior that includes neglecting their dying mother.

As rolling out has previously reported, the Precious star has been buried under an avalanche of severe rebukes and criticisms over the past few days with her public declaration of a boycott of Neftlix for what she calls “race/gender” bias. They reportedly offered her a paltry $500K offer for a comedy special, whereas others have received up to $10M or more for similar work.

But Mo’Nique’s younger sibling Millicent Imes is lighting the fuse beneath Mo’Nique’s feet by admonishing her to “get a grip” and that “everybody can’t be wrong!” She also took the occasion to chastise Mo’Nique for not visiting their very sick mother who has, according to Imes, suffered at least one heart attack and stroke, among other medical maladies.

On a long Facebook post that was screen-shot by Straight from the A, Mo’s sister blasts Mo’Nique’s decision to call to boycott Netflixt, and telling her in the open letter that she is not the A-Lister she thinks she is.

This is what Imes had to say via Facebook, according to straightfromthea.com:

“OK.. So my phone can stop ringing and the Messages can stop coming!!

Here is my Reply….And I thought the Suck A D..K. Would end what little. Career she had left. But Damn $500,000.00 would have Probably Given you the CROSS OVER That You could NEVER Obtain. and you wants to Play the IMMA “A” list Whatever!!! And Again. YOUR NOT.. So what the others were offered…it was Based on there Merit. And Not there OSCAR!! Sis PLEASE GET A GRIP!!! I know your Reading your Comments. And like your WHATEVER He is said. EVERYBODY ELSE CANT BE WRONG!! Go. Figure.

Stay in YOUR LANE Boo. Well Enough Said. Lets ALL Keep her in PRAYER!! “Bye FELISHA”
This SONG Explains IT!!

PS: Ooh and by the Way. Mommies doing Good if you wanted know!! 💘 ya.”

Millicent’s post was followed a song by Teddy Pendergrass called “The Whole Town’s Laughing At Me”:

Imes also implores Mo’Nique to reach out to their ailing mother. And, when asked about it by her Facebook followers, Imes tells them her sister hasn’t reached out to their mother whatsoever even though she’s had, according to Imes, “4 Surgerys [sic]. 2 Heart a Attaks [sic]. And 3. STROKES!!!”

In related news, Mo’Nique and her husband Sidney Hicks continue to double down on her claims of Mo’Nique’s considerable Hollywood “bankability,” How much of this is influenced by Hicks, if not all of it, remains a mystery. 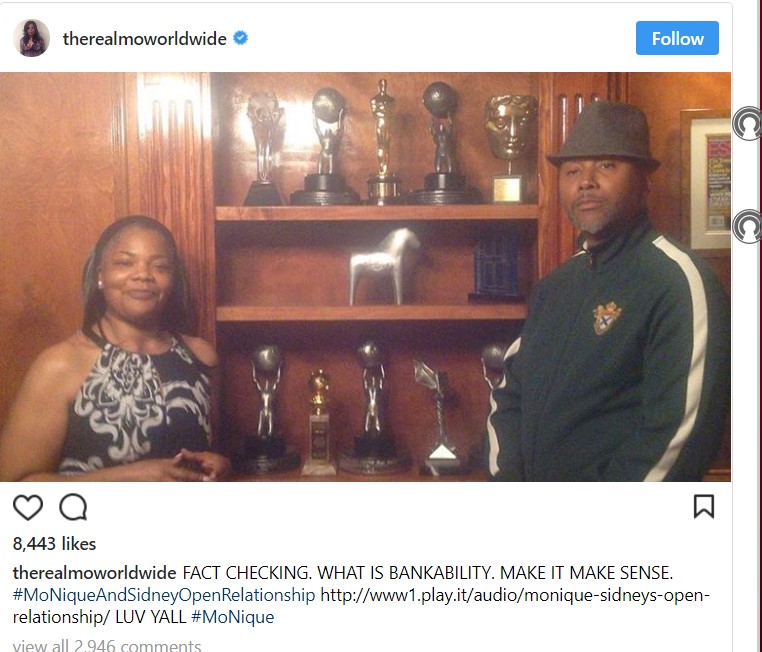