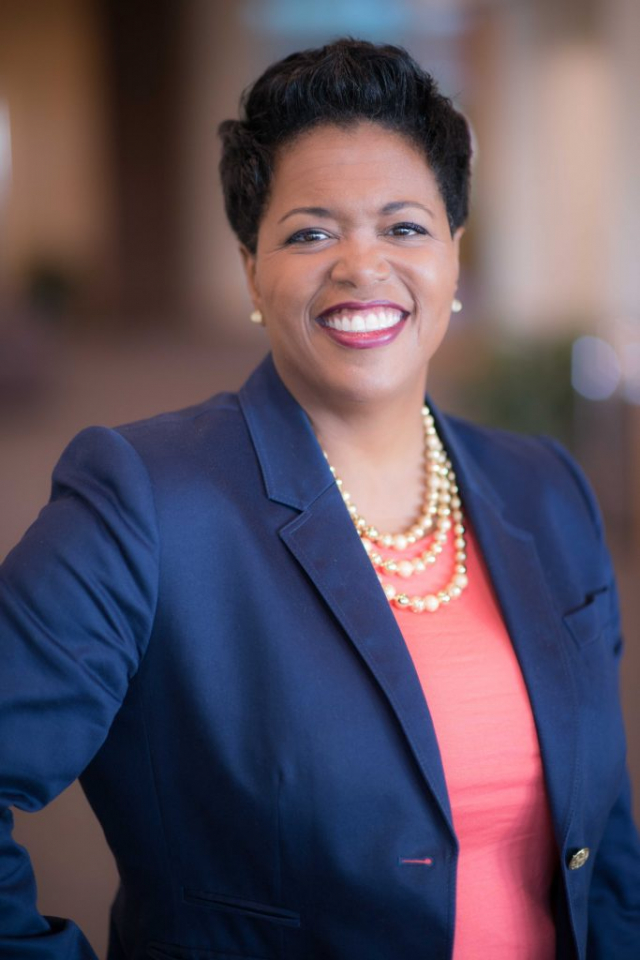 Bentina Terry was blessed with an opportunity that she did not see coming when she was hired by Georgia Power. Terry is a direct reflection of how sometimes we have to just trust the process. Terry has received several awards such as: “One of the Most Powerful People in Florida Politics” as well as being “The Most Powerful Person in Pensacola, Florida.” But to Terry, it is not about the awards but more about the imprint she hopes to leave on others. She is a proud wife, sister, daughter and aunt, who has created a road map for young Black girls to follow. Terry is a sister with super powers who makes a difference in the community.

What is your position at Georgia Power and how did you determine your career path? What inspires you to show up for work every day?

My position is senior vice president, northwest region for Georgia Power. I would say that my career path was partly by planning and partly by chance. I went to school to be a lawyer and practiced law for a while. One of my clients was Georgia Power. Eventually, I became employed with Georgia Power and they gave me a chance, saw some other skills in me and gave me an opportunity to do non-legal work.  I would not have plotted this path for myself, but I am pleased with the outcome. I show up every day inspired by what I do because I love what I do.  I get to work for a company that cares about our customers and our communities — wants to make the lives of our customers better and improve our communities — and my job is to help the company fulfill that mission. It’s a real blessing to get to do what I do.

What are the best practices you have employed to build a successful career?

What is one of the biggest challenges of your position with Georgia Power?

It’s a big territory for the company — of the 2.4 million customers Georgia Power has, I have responsibility for 60% of them.  It is also very diverse and includes many counties, some rural and some urban. My goal is to get to know the customer and the communities in my region in a way that will help me and my team be effective.  The challenge is getting to know as much as I can about my customers and my communities without being overwhelmed by the diversity of my region.

What do you feel is one of the key barriers to underrepresented minorities and women achieving success?

Besides the obvious “isms,” I think it’s exposure. Exposure can make you aware of opportunities that can be life-changing or that can open doors that you didn’t know where there.  I’ve often found that women or minorities either work harder than necessary or miss an opportunity because they didn’t know about something.  One example was when I was in law school.  Some of the other kids had parents or relatives that were lawyers. They knew how to best study — outlines and study groups — and for those of us who did not, we just didn’t know. They had the exposure that gave them a leg up while we all fumbled around for the first semester if not longer. That lack of exposure hurt some of us academically, further putting us behind.

What is your biggest accomplishment?

I have a lot of good things I’ve had the opportunity to accomplish and I’ve received several awards for my efforts from being named one of the most powerful people in Florida politics to being the most powerful person in my previous community, Pensacola, Florida. While I am very proud that I’ve had a successful career, and gotten to do things that made our company and our community better, I am most proud of the relationships I’ve formed and that is what I want people to remember. My biggest accomplishment that I work on every day, is that I’ve tried to positively impact the lives of others. I’ve enjoyed being mentors to several young women both inside and outside the company and have seen many of them find their own version of success.  I’m proud to be a good wife, sister, daughter and aunt. Those relationships are the ones most important to me.  Regardless of the accolades and awards, it’s the imprint I hope to leave on the lives of others, the legacy I strive to leave with my family that matters.

What is your superpower?

My smile … I’ve been told by many people that it is disarming. Seriously, I do think my positive outlook and demeanor has served me well in most settings … has diffused situations and adversaries.

What do you see as a big disruptive in your industry?

The big disruptor in our industry is the “personalization” of energy. It used to be that power was only efficiently and effectively supplied from large power plants. Those plants took a large capital investment and therefore were only done by large companies that could afford to build, operate and maintain them. Now customers have choices, some completely close competitors, others close enough to be a good choice. Customers also want to have more control over how they are billed and when they use energy. The good thing is that we want to be engaged with our customers as they look at these options and on some occasions, not just be an energy expert but to supply what they want in a way they want it.

What is one word of advice you can offer to young girls who want to reach your level of success?

My advice is to be the best version of yourself that you can be. First, I encourage them to be themselves and don’t try to be someone else. Secondly, don’t be less than fully engaged, fully committed version of yourself. We should all strive to be our best self. Sometimes we will fail, but it’s only by striving to be best that you can even begin to get there.

What are three challenges you have faced as an African American woman in your industry?

First, not letting others define me. People like to tell you what you can and cannot do. I’ve often been the first African American female (or African American) in a role or at the certain level. If I let others define where I could go and what I could do, I might not be where I am now.  Second, being third, to not let the thoughts and opinions of others derail me. I know that some people may have questioned if I got a role because of my race or gender or both. I can’t let that concern me. We must put our efforts into people that matter and things we can control — our sphere of influence. Naturally, we care about what others think, but we can’t let that take our focus away from getting done what needs to get done.

What is one of biggest contributors to your success, such as being selected for the “IN Power List”?

Pensacola is a small community but a welcoming community. I tried to find where I could engage to make a difference in that community and once I found those places that were right for me and my skills, I fully engaged. I wanted to leave that community better than I found it in my own way. My placement on the list with many others in that community was a recognition that I was doing that.

What do you feel are the key components to strengthening a community and advancing its economic development?

The key component to strengthening a community is equity. We must endeavor to reach everyone in our community and ensure that economic prosperity reaches all citizens. Educational attainment and skills training must be accessible to everyone as well as a diversity of jobs.

Do you feel that community service is vital in the advancement of our communities around us?

Yes. We cannot and should not depend on the government to make our communities better.  As business leaders, we owe it to the communities we serve and the customers who live in these communities to be engaged and to make them better. I grew up being told, as many of us have, “to him much is given, much is required.” I believe it.

My mom. She had my eldest brother at 15 and my sister at 18. This was [at] a time when it was more taboo than today. She couldn’t go straight to college. Instead, she had to work and take care of her family. She worked full time, raised four kids with my dad, volunteered in the community, and went to school at night. It took her almost 10 years but she obtained two associates degrees, then a BA, and finally the semester I graduated from law school, she graduated with her MBA. At age 67, she was elected to the school board back home and she just finished being the international president of the oldest organization for African American women. Nothing stops my mom. She never let her decisions early in life define how she lived the rest of her life. As you can imagine, she never let us make excuses either.

Explain why lifelong learning is important to you.

First, because I’m naturally curious, I love learning about history and why things work a certain way. My husband says I have a fountain of useless knowledge in my head from all the stuff I read. He’s right! I often don’t get to use it but I love finding stuff out. Second, because as you age, learning keeps you mentally strong. Your brain is like other muscles. It must be exercised!