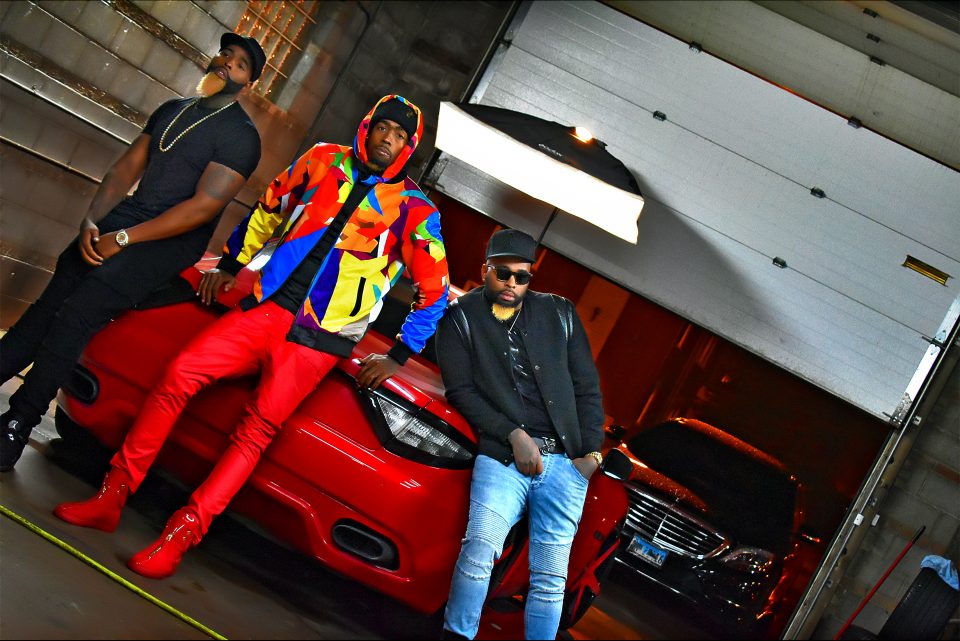 The Harmon Brothers (Demetrius, Rod, and Darius) grew up on Chicago’s South Side, bouncing between homes in both Auburn Gresham and Pullman.

They were raised collectively by their parents and grandparents in homes that were deep-rooted in music and the arts.

At an early age, they began custom designing jeans for classmates using old designer handbags and accessories.  They also created hand-painted T-shirts for people in the community.  In August 2015, they decided to start their own men’s high-end clothing line and began looking for retail space. By January 2016, the brothers opened Veyron Calanari in Chicago’s Ukrainian Village. In a four-month span, they designed, sourced and packaged an entire men’s clothing line including jeans, t-shirts, polos, shoes, belt buckles, hats, and scarves.  Their clothing has been worn by celebrities including Nick Cannon, Joe Sikora, Jeremih, Lil Durk, Jojo Simmons, King Louie, Famous Dex, Chief Keef and Michael Blackson.

Rolling out caught up with the brothers recently to discuss motivation and life.

Rod: By standing behind whatever you believe in 150%; always write down your goals and execute.

If you were to give a speech to young men, what would you title your speech and why?

Demetrius: Choices: It is the choices we make in life that dictate our future.

What two quotes do you use to motivate yourself and others?

Darius: Lead by example; work every day as if it’s your last.

Name two iconic humans that have inspired you or currently inspire you. Why?

Rod: Martin Luther King, Jr. had a dream that he could change the world and he stood behind it, even at the cost of losing his life.

Master P – I can relate to his struggle, childhood dreams, living in the ghetto, coming from a huge family, being the oldest brother, having NBA dreams and hoping one day to become a rap artist.

Demetrius: When Veyron Calanari was born, it served as my alter ego; as VC I was limitless. I could drive fast cars and wear flashy clothing without caring about what other’s thought of me. We keep that same mindset when designing our men’s clothing and craft bold designs and edgy styles. We want our customers to feel alive in our clothing, to make a statement without having to say a single word.

How do you build your network for success?

Darius: I am constantly interacting with people everywhere I go – at the gym, gas station, in the grocery store. Getting to know people and listening to their stories allows me to grow and further build a foundation for myself and our company.

What two moments in your life changed you the most?

In 2008, I entered MTV’s The Engine Room graphic design competition and was awarded the No. 8 spot out of 100K entries worldwide.  This landed me a guest VJ spot for MTV’s The Engine Room Graphic Design Show and I designed and starred in my own commercial, which aired worldwide for two months on all major MTV networks.

What are three important pieces of advice you would tell your son/future son/Godson, etc.?

Darius: Stay prayed up. If you take one step, He will take the next one. God will not fail you.

Always walk with your head held high. Learn from others’ mistakes so that you can limit your own.

What piece of advice would you tell your teenage self?

Rod: Lead; never follow. Serve a purpose in whatever you do. Treat everyone with respect. Do not be afraid to ask questions. And most importantly, never be afraid to do extra – it works!

Darius: Don’t let your emotions get the best of you. Have self-control; it’s the key to healthier living.

If you could leave a legacy to your children/grandchildren, what would it be?

Rod: Teach them to be empowered, unified, show respect, give honor, have integrity, and strive for greatness. Always remember everyone is entitled to their own opinion.

What do you define as your #BlackManMagic?

Demetrius: My ability to breathe life into an idea and make it a work of art.