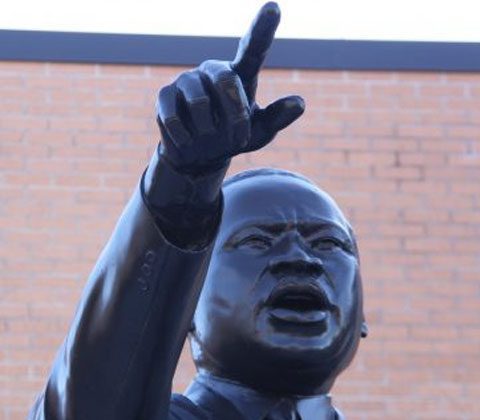 In the vast experience of being Black in America, blood has been spilled and many lives have been lost simply for asking to be treated humanely while demanding equal justice under the law. The most famous of our Black martyrs is the Dr. Martin Luther King Jr., who was slain by James Earl Ray in Memphis, Tennessee, as he was standing on the balcony of the Lorraine Motel on April 4, 1968.

King was in the city fighting for the rights of garbage workers and his assassination was a watershed moment in not only Black history but also American history. King’s assassination is an indisputable fact taught to schoolchildren in the United States today. Except for one class where elementary school students were told by a White substitute teacher that King committed suicide.

The incident happened at Rand Road Elementary in Garner, North Carolina, recently and parents are outraged. According to the HuffPost, substitute teacher and Trump supporter Elizabeth Temple decided that this false information would be good for the students. Temple was assigned to cover a music class and her only task was to play a video for the students that day. She allegedly became frustrated that the students would not calm down and decided to change the lesson plan. But according to Billy Byrd, whose son Nathan was in the class, she did not stop with just her MLK comments. She went on to target young Black boys in the classroom.

According to Byrd, she told his son and other Black boys that because of what they were wearing, they were destined for prison. Temple also allegedly told the students that people who didn’t support President Donald Trump weren’t real Christians. Nathan told media outlet WTVN, “She said, ‘If y’all keep doing what you’re doing, you’re going to go to jail.’ So, I stood up in front of the class and I said, ‘So, you’re basically going to predict my future that hasn’t even happened yet?’ ”

When Nathan returned home and told his father what was said, his dad was outraged. Byrd posted a long comment on Facebook that expressed not only his anger but that of other parents whose children were in the classroom. In his Facebook post, Byrd detailed what happened to his son and others. It also addressed the fact that he spoke to school administrators who were also shocked at the report.

Additionally, he posted pictures of Temple and demanded that she never teach children again. As a result, Timothy Simmons, the chief of communications of the Wake County school board, issued the following statement to the media:

“The school became aware of the students’ concerns Friday afternoon as classes were ending. The principal and staff talked with as many students as possible before the day ended. Based on those conversations, the substitute teacher was contacted over the weekend and immediately resigned. She is no longer eligible to teach in the district.”