Kim Porter, the former girlfriend of rapper Diddy– whose real name is Sean Combs – passed away last year after suffering from lobar pneumonia.

In an Instagram interaction from Monday, March 4, 2019, the 49-year-old music mogul admitted he wishes he could have tied the knot with her while they were still together.

Posting an old picture of himself cuddling with Porter — who was the mother of three of his children, Christian, 20, and 12-year-old twins D’Lila Star and Jessie James — Diddy simply wrote “SMH”, which stands for “shaking my head, alongside a broken heart emoji. 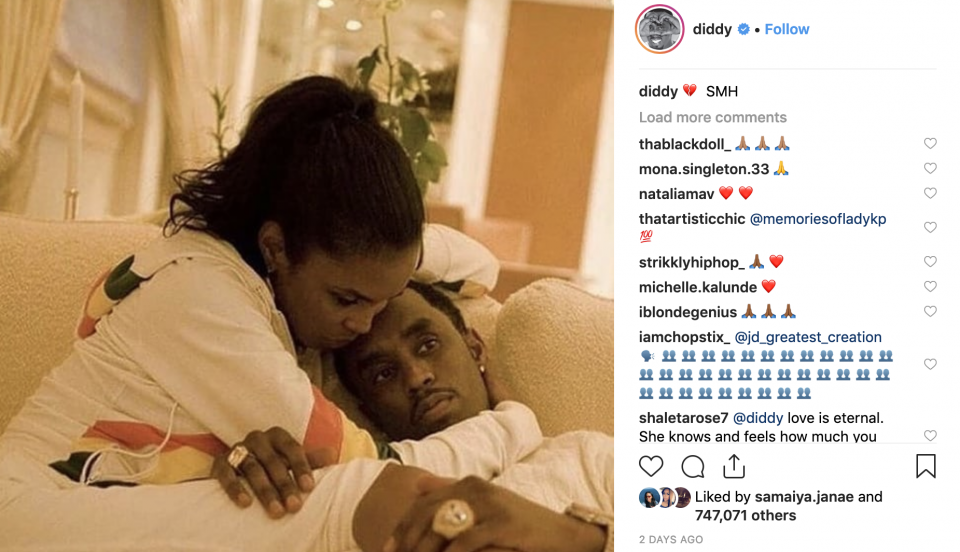 And when one fan pointed out that he “didn’t want to marry” Kim “when she was alive,” Diddy revealed he regretted the choice.

He replied, “I know. Played myself smh (sic)”

The “I’ll Be Missing You” hitmaker — who also raises Porter’s 27-year-old son Quincy and his two children from other relationships, along with Justin, 24 and Chance, 12 — suffered heartbreak after her passing. He recently thanked his family for helping him through “a state of deep depression” following the news.

Posting a picture on social media of his mother with D’Lila Star and Jessie James, he wrote, “Mama and the babies GOD IS SO GOOD. THE GREATEST!!! I’m the luckiest man in the world. The way my family has been strong has humbled me. They have led me. They brought me out of a state of deep depression. Their strength and love brought me back into the light. I love my family!! THANK YOU GOD @CombsFamily #MamaCombs @the_combs_twins @myfancychance they’re all born on the same day!!!! Dec 21. My mother and the twins (sic)”