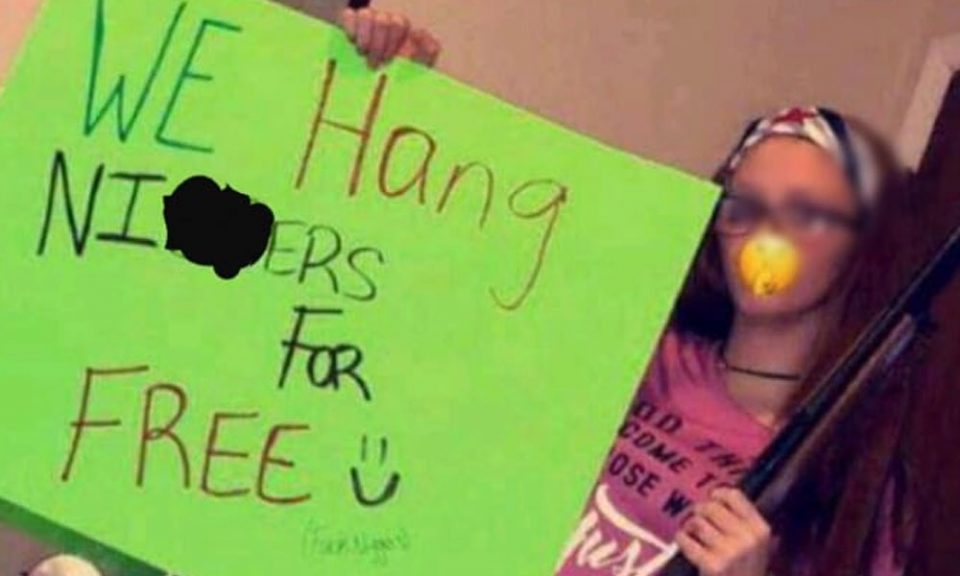 Once again a White high school student is in the news for expressing racism on social media. This time it is a female student from the Greenville School District in South Carolina, according to the media outlet Rawstory.

The student used the social media platform to post a picture of herself holding a gun with a sign. That sign read: “We hang n—–s Simpsonville Police Department for free” and it has caused a real issue. A still image of the student was posted by a Facebook user and she has been identified as attending Hillcrest High School.

According to Fox Carolina News, the Simpsonville Police Department was alerted to the threat and an investigation was launched. Greenville County Schools spokesperson Beth Brotherton has stated to media that the unidentified female student has been suspended and recommended for expulsion by the school district.

Although police found no credible threat against Black students, the local NAACP branch is not pleased with the administration’s response. The Rev. J.M. Flemming, president of the NAACP in Greenville, issued the following statement:

“We are saddened to hear of a racial attack on [Blacks] by a [White] student in Greenville County Schools. This shows the issue of racism is very real sense this youth was not born during times of civil rights era then racial hatred is embedded. As the Greenville NAACP, we are working to address the rising spread of racial and religious hatred in this country and especially in Greenville County. This racial incident brought to light on April 30th is one of many racial incidents but most are not reported in the media. Greenville County must be open, to tell the truth about racism and continue dialogues on racism and its side effects. The Greenville NAACP is very supportive of Public Education but this racial attack is at the Expulsion level of the School District’s Zero Tolerance Policy. We are waiting to see the District’s response and stand ready to be a part of any conversation.”